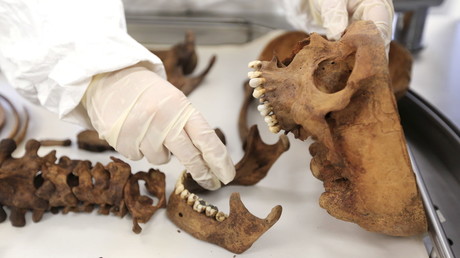 Britain’s first body farm – a research facility where human remains are left to decay outdoors and in water – could soon be established in an effort to improve police forensics.

First established in the US during the 1970s, the grisly facilities involve donated cadavers being placed in a variety of settings in order to assess how skin, bones and hair decompose over time.

The idea is to provide a controlled environment where scientists can track how death wreaks havoc on the human body. According to the Sunday Telegraph, unnamed UK ministers are said to be considering whether such a facility would be beneficial to forensic investigators involved in murder cases.

It’s thought that the University of Huddersfield might be a potential location for the center, with the government also in talks with the Human Tissue Authority, a regulator set up to guard the handling of human remains.

“The benefits to science would help us in a number of ways,” she said. “We would be able to more accurately know when someone died, as well as being able to identify potential criminals, say from fingerprints or DNA on decomposed skin.”

Body farms already exist in a number of US universities such as Colorado Mesa and the University of Tennessee at Knoxville. At Colorado Mesa, donated bodies are placed in an outdoor laboratory where they are left to decay naturally.

The facility is used by anthropologists studying taphonomy – the transition of organic material.

Once the body goes through the process of decay, Colorado Mesa says they store people’s bones in a collection, which can be visited by family members.