On the 70th anniversary of Israel’s so-called “declaration of independence,” the United States opened its new embassy in Jerusalem—a city Israel claims as its own, despite what international law says on the matter—and Palestinians undertook unarmed protests in reaction to the move and as part of the Great Return March. Although to this point, the only Israeli casualty during the entire cycle of demonstrations has been one “lightly wounded” soldier, considerable space in coverage of the massacres is devoted to blaming Palestinians for their own slaughter. 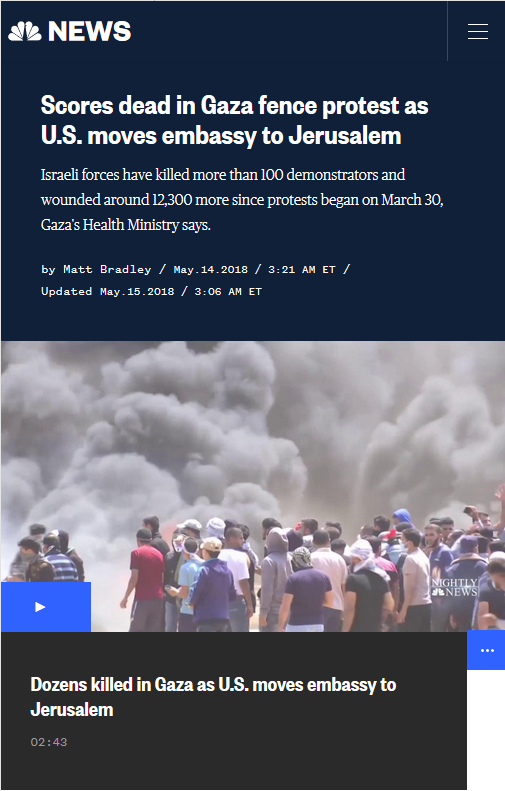 NBC (5/14/18) mentions “what Palestinians refer to as their ‘right of return’”; actually, it’s what international law calls it, based on the Universal Declaration of Human Rights‘ proclamation that “everyone has the right…to return to his country.”

Two of the first three paragraphs in an NBC report (5/14/18) provided Israel’s rationalizations for its killing spree. The second sentence in the article says that the Israeli military

accused Hamas of “leading a terrorist operation under the cover of masses of people,” adding that “firebombs and explosive devices” as well as rocks were being thrown towards the barrier.

A Washington Post article (5/14/18) devoted two of its first four sentences to telling readers that Palestinians are responsible for being murdered by Israel. Palestinian “organizers urged demonstrators to burst through the fence, telling them Israeli soldiers were fleeing their positions, even as they were reinforcing them,” read one sentence. “At the barrier, young men threw stones and tried to launch kites carrying flames in hopes of burning crops on the other side,” stated the next one, as though stones and burning kites released by a besieged people is violence remotely equivalent to subjecting people to a military siege and mowing them down.

The New York Times (5/14/18) said that “a mass attempt by Palestinians to cross the border fence separating Israel from Gaza turned violent, as Israeli soldiers responded with rifle fire,” painting Israel’s rampage as a reaction to a Palestinian provocation. Like FAIR (2/21/18) has previously said of the word “retaliation,” “response” functions as a justification of Israeli butchery: To characterize Israeli violence as a “response” is to wrongly imply that Palestinian actions warranted Israel unleashing its firing squads.

A Yahoo headline (5/14/18) described “Violent Protests in Gaza Ahead of US Embassy Inauguration in Jerusalem,” a flatly incorrect description in that it attributes the violence to Palestinian demonstrators rather than to Israel. The BBC (5/15/18) did the same with a segment called “Gaza Braced for Further Violent Protests.” 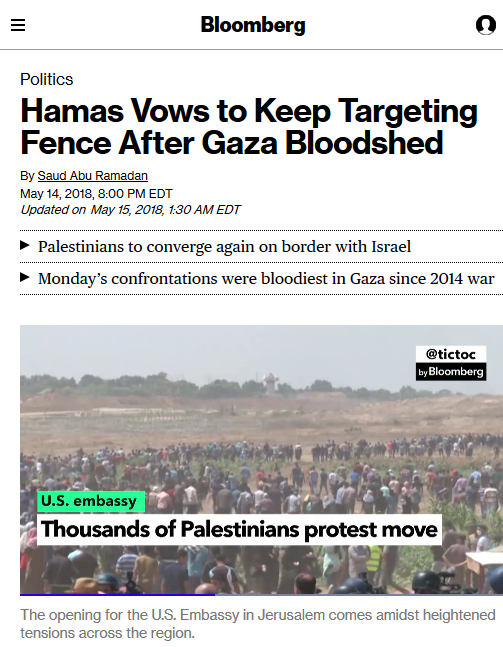 One Bloomberg article (5/14/18) by Saud Abu Ramadan and Amy Teibel had the same problem, referring to “a protest marred by violence,” while another one (5/14/18) attributed only to Ramadan is headlined “Hamas Targets Fence as Gaza Bloodshed Clouds Embassy Move,” as though the fence were Monday’s most tragic casualty. Ascribing this phantom violence to Palestinians provides Israel an alibi: Many readers will likely conclude that Israel’s lethal violence is reasonable if it is cast as a way of coping with “violent protests.”

Gaza protesters, egged on by loudspeakers and transported in buses, streamed to the border, where some threw rocks, burned tires, and flew kites and balloons outfitted with firebombs into Israeli territory.

This author—like the rest in the “Palestinians were asking for it” chorus—failed to note that Israel’s fence runs deep into Palestinian territory and creates a 300-meter “buffer zone” between Palestinians and Israeli forces, which makes it highly unlikely that the kites and balloons of the colonized will have an effect on their drone-operating, rifle-wielding colonizers, let alone on people further afield in Israeli-held territory.

The New York Times editorial board (5/14/18) wrote as though Palestinians are barbarians against whom Israel has no choice but to unleash terror:

Led too long by men who were corrupt or violent or both, the Palestinians have failed and failed again to make their own best efforts toward peace. Even now, Gazans are undermining their own cause by resorting to violence, rather than keeping their protests strictly peaceful.

The board claimed that “Israel has every right to defend its borders, including the boundary with Gaza,” incorrectly suggesting that Palestinians were aggressors rather than on the receiving end of 100 years of settler-colonialism.

Moreover, like the Times and Bloomberg articles discussed above, the editorial attempts to legitimize Israel’s deadly violence by saying that it is defending a border that Palestinians are attempting to breach, but there is no border between Gaza and Israel. There is, as Maureen Murphy of Electronic Intifada (4/6/18) pointed out, “an armistice line between an occupying power and the population living under its military rule” that Palestinians are trying to cross in order to exercise their right to return to their land. 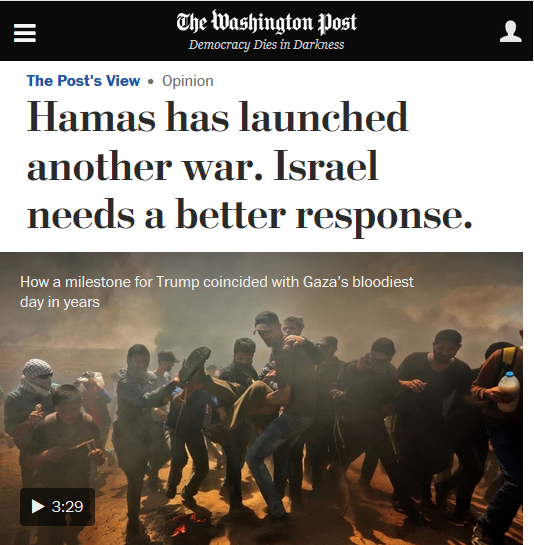 The Washington Post (5/15/18) condemned the “cruel, cynical tactic” of trying to exercise the internationally guaranteed right of return.

A Washington Post editorial (5/15/18) called the Palestinians hunted by Israel “nominal civilians.” Apart from being a logical impossibility (one either is or isn’t a civilian), the phrase illuminates how too much of media think about Palestinians:  They are inherently threatening, intrinsically killable, always suspect, never innocent, permanently guilty of existing.

A Business Insider piece (5/14/18) by columnist Daniella Greenbaum described “Palestinian protesters who ramped up their activities along the Gaza strip and, as a result, were targeted by the Israeli army with increasing intensity.” Greenbaum’s use of the phrase “as a result” implies that it was inevitable and perhaps just that Palestinians’ “ramped up activities” led to Israel mowing down a population it occupies, 70 percent of whom are refugees Israel refuses to allow to return to their homes.

Greenbaum then climbs into the intellectual and moral gutter, claiming that

absent from the commentary that children have unfortunately been among the injured and dead are questions about how they ended up at the border. On that question, it is important to recognize and acknowledge the extent to which Palestinians have glorified violence and martyrdom — and the extent to which the terrorist organization Hamas has organized the “protests.”

In her view, dozens of Palestinians died because they are primitive savages who take pleasure in sacrificing their own children, not because Israel maintains the right to gun down refugees in the name of maintaining an ethnostate.

In a rare instance of a resident of Gaza allowed to participate directly in the media conversation, Fadi Abu Shammalah wrote an op-ed for the New York Times (4/27/18) that offered an explanation of why Palestinians are putting their lives on the line to march. Life for the people of Gaza, including for his three young sons, has been “one tragedy after another: waves of mass displacement, life in squalid refugee camps, a captured economy, restricted access to fishing waters, a strangling siege and three wars in the past nine years. ” Recalling the concern for his safety expressed by his seven-year-old child, Shammalah concludes:

If Ali asks me why I’m returning to the Great Return March despite the danger, I will tell him this: I love my life. But more than that, I love you, Karam and Adam. If risking my life means you and your brothers will have a chance to thrive, to have a future with dignity, to live in peace with all your neighbors, in your free country, then this is a risk I must take.

Palestinians have a right to liberate themselves that extends to the right to the use of armed struggle, yet as Shammalah wrote, the Great Return March signifies a “nearly unanimous acceptance of peaceful methods to call for our rights and insist on our humanity.” Nevertheless, based on media coverage, readers could be forgiven for concluding that it was Palestinians, not Israel, who carried out what Doctors Without Borders called “unacceptable and inhuman” violence.