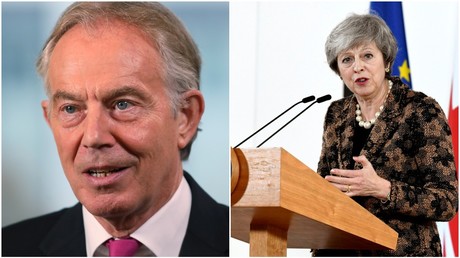 Former British Prime Minister Tony Blair has found himself in a public spat with Theresa May, saying her Brexit plan isn’t in the national interest. It comes after May hit out at him for backing the idea of a second referendum.

“…I profoundly believe that the course [PM May] is pursuing will not work and is emphatically not in the national interest. And that’s the reason I am speaking out and shall continue to do so,” Blair said on Sunday.

This came just one day after May lashed out at Blair for pushing for a second Brexit referendum.


“For Tony Blair to go to Brussels and seek to undermine our negotiations by advocating for a second referendum is an insult to the office he once held and the people he once served,” May said on Saturday.

But Blair disagrees, with his office stating that it is “not irresponsible or insulting to put forward an alternative way to achieve resolution” since it is “perfectly clear neither the British people nor their parliament will unite behind the prime minister’s deal.”

The former prime minister has been urging EU member state politicians to remain open to the option of a second referendum. He suggested on BBC Radio 4’s Today program last Friday that private conversations had led him to believe the EU might be willing to offer concessions on free movement if it meant a second referendum which would end in a ‘Remain’ vote.

But Blair said he believes the first course of action should be for British MPs to be given the chance to vote on each of the Brexit deals that have been proposed, including the one agreed between May and the EU. “If they can’t reach agreement then the logical thing is to go back to the people.”

Also on rt.com
Dead end: UK’s Theresa May has led her party & country into an impasse


May has faced backlash from all sides following the Brexit deal, with several ministers resigning after the agreement was secured with the EU. Among them are Brexit Secretary Dominic Raab and Work and Pensions Secretary Esther McVey. Former Foreign Secretary Boris Johnson resigned back in August, after previously referring to May’s Brexit deal as “polishing a turd.”

May postponed the vote on the deal until January 21, apparently in the hope of garnering more concessions from the EU in an attempt to make the deal more attractive to British MPs.