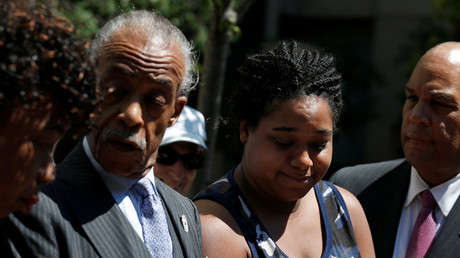 Black Lives Matter campaigner Erica Garner, who came to prominence after her father, Eric, was killed in a police chokehold, has died at the age of 27.

The activist’s death was confirmed by her family on her official Twitter account, with Garner’s sister urging people to remember her as a “mother, daughter, sister and aunt.” Garner suffered “major brain damage” from a heart attack last weekend.

“Her heart was bigger than the world. It really really was. She cared when most people wouldn’t have. She was good. She only pursued right, no matter what. No one gave her justice,” she wrote.

Erica the world loves you. I love you. I am glad you came into our lives. May you find the peace in the next life that you deserved while you were here. I will always love you my sister. love you

She passed away this morning. The reports are real. We didn’t deserve her.

Garner was hospitalized in critical condition earlier this month after suffering a heart attack. Her family confirmed this week that she had been declared brain dead after an asthma attack reportedly stressed Garner’s enlarged heart and triggered cardiac arrest.

She died at Woodhull Hospital of natural causes, according to the Reverend Al Sharpton, as reported by the New York Post. He added that her family did not remove her from life support.

Garner’s father, Eric, died in July 2014 after being placed in a chokehold by a New York Police Department officer. His last words were reportedly “I can’t breathe.”

Following her father’s death, Garner led marches in New York and elsewhere, drawing attention to the plight of African-Americans who’ve been victims of police brutality.

In December 2014, a grand jury decided not to indict the New York Police Department officer who put Eric Garner in a chokehold, Daniel Pantaleo. The city settled out of court with Garner’s family for $5.9 million in 2015 but the family insisted it was not a victory and renewed calls for federal charges in the case.

Garner gave birth to her second child in August, naming him after her late father. It was during the pregnancy that she was diagnosed with an enlarged heart and suffered her first heart attack shortly after the delivery.

During the 2016 US presidential campaign, Garner endorsed the bid of Vermont Senator Bernie Sanders to become the Democratic presidential candidate and slammed the Clinton campaign when leaked emails revealed they were discussing how to use her father’s death as political capital.

“These people will co-opt anything to push their agenda,” Garner said, calling out Clinton’s campaign team on Twitter.

I’m troubled by the revelation that you and this campaign actually discussed “using” Eric Garner … Why would you want to “use” my dad?

Tributes have been pouring in from fellow human rights activists, with many leaving the message “Rest in power” to honor the political activist and mother of two.

RIP Erica Garner, my friend. I will never forget those long conversations we would had in my office about your dreams to help young people. You will missed by all of us.

Your memory will always live in our hearts and our movement for justice. pic.twitter.com/PVBnRjYOUR

Proud to support the Rosenberg Fund for Children @wwwrfcorg. They help kids whose parents are targeted activists & assist activist youth harassed by police, gov’t agencies, immigration gestapo or other adults who hate dissent and democracy. In honor today of Erica Garner R.I.P.