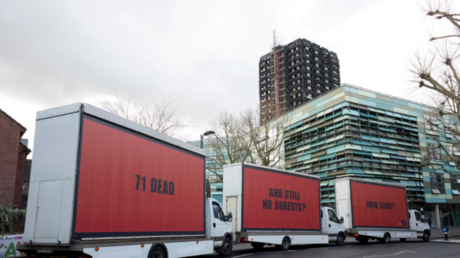 Billboards have been displayed outside the burnt ruin of Grenfell Tower stating: “71 dead… and still no arrests… how come” in a move inspired by the Oscar contender ‘Three Billboards Outside Ebbing, Missouri.’

The activist group, Justice 4 Grenfell, was inspired by the film, according to Yvette Williams MBE, who told RT UK that the line “You have to keep things in the public eye” stuck with her and her colleagues.

Williams accused the government of “downplaying” the inquiry, before vowing that there were more billboards to come and that “we are not going away.”

Following the post the group inudated with Tweets of support.

I can see Grenfell from my office. Sickening to see the lack of action, care or empathy from the local council and government.

Well done! It’s as if the government have forgotten this horrific preventable event.

The film, directed by Londoner Martin McDonagh, tells the story of a mother’s campaign against her local police department which, in her mind, have failed in their investigation of her daughter’s murder. The mother, played by Frances McDormand, commissions three billboards outside her local town imploring the police to take action. The film has been tipped to win big at the upcoming Oscars.