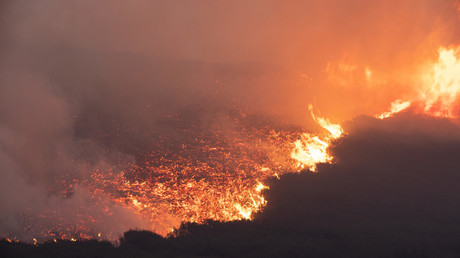 The army is on standby as a fire rips through the Pennines, north of England, described as the “biggest blaze in living memory”. Homes in Greater Manchester have been evacuated as 50 firefighters fight the flames.

Emergency services have evacuated residents from 34 homes in Carrbrook, near Stalybridge. There are currently no reported injuries as the fire at nearby Saddleworth Moor rages on.

The fire began on Sunday, it was initially brought under control by fire crews, but it flared up again on Monday as a result of winds and hot weather. It is understood that the inferno has already destroyed an estimated 2,000 acres of land, and has come within 200 feet from homes in certain areas.

Speaking at a press conference on Wednesday morning, Greater Manchester Fire and Rescue Service assistant chief fire officer Leon Parkes said crews are reassessing the scene this morning and will be formulating tactical plans for the day.

Here’s a short selection of images from the devastating moorland fire near Carrbrook as seen from the hill behind my house in Mossley. It’s still burning as of 13:30 today and the air is now thick with smoke ! Could you please RT ? Thanks Lucy ! pic.twitter.com/B8LOcgalfC

“Currently we have up to 50 firefighters in attendance with support from Derbyshire Fire and Rescue Service and two wildfire units covering an area of 6km. Air samples have been taken by our partners in multiple areas and the air levels are safe.

“Please avoid the area if possible, and if you are using the M60, please drive safely as this area may be affected by smoke.”

🚒👨‍🚒 We are reassessing the scene this morning in Tameside and will be formulating tactical plan for today. Currently we have 50 firefighters on the scene with help from @DerbyshireFRS and two wildfire units.
💻🔥 Latest update on our website here 👉https://t.co/NvvXH8kRI1

Firefighters worked through the night to keep the flames at bay and at first light, offensive firefighting on the moors recommenced. A total of ten fire engines on the scene on Wednesday.

Some 65,000 gallons of water were dropped on the blaze by a helicopter on Tuesday to fight the fire.