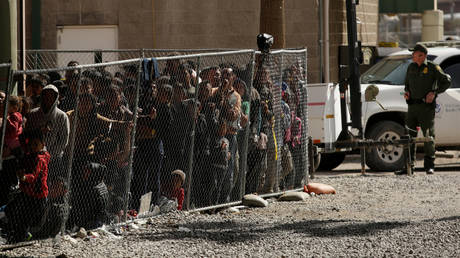 After Border Control Commissioner announced “crisis levels” of detentions had been reached in El Paso, Texas leading to hundreds of migrants being held under a bridge, politicians are finally stepping in… to point fingers.

Border Control Commissioner Kevin McAleenan announced Wednesday that 13,400 migrants are currently in custody, which is well above the “crisis level” of 6,000. He expects 100,000 will be taken in by the end of March if steps are not taken.

One of the biggest issues for border agents is the dramatic increase in entire families attempting to enter the US, including a large number of children. As opposed to 20 years ago, many of the migrants attempting to cross the US border are from Central America, making them much more difficult to repatriate than Mexicans. The numbers have even forced the agency to risk some “direct release of migrants.”

As pictures of the huddled migrants stuffed into the makeshift detention center began to spread across social media, US politicians began to do what they do best: mobilize the issue for personal political gain.

US President Donald Trump blamed the usual cast of characters for the mayhem, and even threatened to close down the border altogether in order to alleviate the overcrowded detention facilities.

Sen. John Cornyn (R-Texas) lamented that the migrant surge had forced border patrol agents to leave their posts to deal with the human wave, leaving the border itself vulnerable to drug cartels – and, presumably, still more migrants.

40% of border patrol agents are now off the patrol line and spending their time processing migrants, providing care, and providing transportation. This has left areas of the border vulnerable to exploitation by the cartels. https://t.co/f20egJdQ3O

.@SecNielsen is right. There is an undeniable crisis at our border causing a flood of migrants in Arizona communities. This is a public safety & humanitarian emergency. I stand ready to work with anyone who is ready to solve this problem. https://t.co/gcWmv9Q1P7

On the Democratic side, Presidential hopeful Beto O’Rourke called for the government to stop holding “our fellow human beings” under bridges, but didn’t specify how Border Patrol should handle the swelling number of illegal crossings. The candidate will visit El Paso as a part of his home-state campaign tour this Saturday.

Unacceptable. This is not how we should be treating our fellow human beings. Together, we closed the desert tent camp in Tornillo. Now we must stop trapping asylum seekers and refugees under a bridge for days at a time. It’s on all of us if we don’t. https://t.co/1js6ZXpTge

Other candidates such as Kamala Harris also drew attention to conditions the conditions of the migrants’ detention, calling the situation a “humanitarian crisis”

What’s happening at our border in El Paso is unmistakably a humanitarian crisis. Leaving families outdoors in cramped, unsanitary conditions with little or no access to hot food and showers is cruel and a violation of their human rights.⁰https://t.co/QHMls4lFV0

Perhaps the most radical perspective on the issue came from freshman senator Ilhan Omar who said that it was a reflection of what “white nationalism” is doing to the country.

This is abhorrent and inhumane.

It’s without a doubt a reflection of what white nationalism is doing to our country. As a country, we have to acknowledge that this is how people are being treated here and decide that we are better and we must do better. https://t.co/5YNAJFNZo7

The Pentagon on Tuesday signed off on $1 billion for border security fences and roads, though border security agents say they need more full time staff to help deal with the influx. McAleenan also called for congressional action, proposing that lawmakers act to craft new legislation that will make it easier to repatriate children from countries not contiguous to the US.