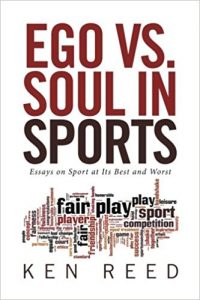 The sports pages of major newspapers, such as the Washington Post,are thriving while other sections of newspapers such as business sections or book review pages struggle to survive.

That doesn’t mean that the sports pages allow the fans, the consumers, the taxpayers and many of the players have their say. Over the years, the sports sections have been neglecting the dark sides of organized sports as a deliberate practice, not as an oversight.

Ken Reed, author of several books, weekly columns, and the Sports Policy Director for our League of Fans, is arguably the leading contemporary essayist of sports at its best and at its worst. Ever hear of him? Probably not. His truth telling rarely makes it onto radio, television and the sports pages or into the sports publications such as Sporting News, because he writes about the greed, the covered-up dangers, the exploitation of youngsters by greedy owners and coaches, and way in which sportsmanship is most often pushed to the sidelines—all issues that the sports industry works tirelessly to suppress and squelch.

Probably no segment of journalism makes censorship so central a part of its craft, and yet receives so little criticism for its failings; no segment of journalism so arrogantly continues to exclude vast regions of crucial reporting from its pages. In his new book, EGO vs. Soul in Sports: Essays on Sport at Its Best and Worst, Reed systematically tackles the most neglected and underreported territories of the…