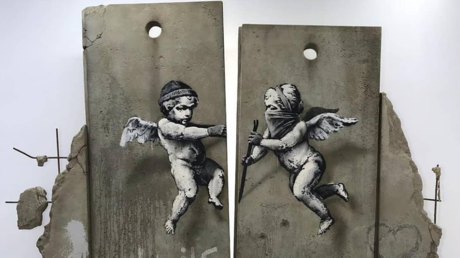 Famous street artist Banksy has recreated a piece of the separation wall between Palestine and Israel for a London world travel exhibit to promote Palestinian tourism.

The artist painted a replica of the 400-mile wall built by Israel along the West Bank. He erected the exhibit at the Palestine stand in the World Travel Market on Tuesday, urging art lovers to “pretend to be a travel agent” and attend the two-day event at London’s Excel Center.

The Palestine stand, one of the smallest exhibits at the event, was thronged with Banksy fans queuing to catch a glimpse of the artwork which features two cherubs, one representing Palestine and the other Israel. Banksy posters, Palestinian scarves and traditional Palestinian food were handed out to those waiting in line.

“Opening my first ever stall at a trade fair next week. I’ve painted a replica separation barrier to promote the Walled Off hotel, ironically the neighbours have complained it’s too tall,” Banksy wrote on Instagram, referencing the hotel he is linked to that opened in Bethlehem in March 2017 to attract tourists to Palestine.

At the time Banksy promoted the hotel as the “the worst view of any hotel in the world, thanks to its location overlooking the 400-mile wall that cuts through the West Bank and divides Israel and Palestine.”

The travel market exhibitor event is visited by more than 50,000 travel executives and employees annually.