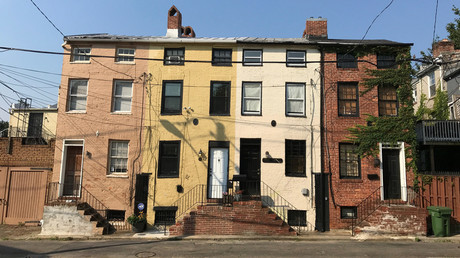 Shocking footage of a Baltimore City police officer repeatedly punching a man in the head has whipped up outrage and resulted in the officer being swiftly suspended.

The punch up took place on Monument Street in east Baltimore on Saturday and video of the incident was shared on Instagram. It shows officer Arthur Williams and a man, Dashawn McGrier, shouting before the officer punches him in the head as onlookers can be heard reacting in shock.

A second officer makes a half-hearted attempt to separate his colleague and the victim, who falls on a set of steps as the officer continues to throw punches. Williams then pins McGrier to the ground, and blood is seen on the pavement.

Baltimore City Police released a statement saying it received video of the incident soon after it happened. “The Office of Professional Responsibility was immediately dispatched to the area. As a result of the information available, Interim Baltimore Police Commissioner Gary Tuggle suspended the officer immediately,” it said. The second officer was placed on administrative duties until the investigation is concluded.

McGrier was released from custody and was not charged with a crime. His attorney, Warren Brown, said his client was being treated in the hospital and “may have suffered a broken jaw, a broken nose, maybe some fractured ribs, and he had difficulty with feeling his left leg, although before I left he did say that he was beginning to get the feel back in his foot, left foot,” WFMZ reports.

According to Brown, McGrier is facing charges of assaulting Williams in June, which he denies. A video from June 26 shared by local media appears to show Williams pinning McGrier on the ground.

McGrier’s attorney tells me his client was charged in a June 26th incident involving the same officer.

A friend of McGrier posted this video, which he says, shows the June 26th incident. #WBALpic.twitter.com/S6Je33bK5h

“I have zero tolerance for behavior like I witnessed on the video today,” Tuggle said. “Officers have a responsibility and duty to control their emotions in the most stressful of situations.”

A federal investigation last year found Baltimore law enforcement has patterns of excessive use of force, racial profiling, and unconstitutional policing. The city was placed under investigation following the death of Freddie Gray, who died after falling into a coma in a police van in 2015.