Britain’s never-truly-gone former Prime Minister Tony Blair has had a busy new year period, filling the void by offering opinions no one wants. Brexit, immigration, ignoring democracy – he’s got a lot to say.

With most politicians up to god knows what in the holiday period (we’ll probably find out in the tabloids soon enough) Blair has seen an opportunity to hold court.

Blair is still so active in political life, one wonders whether sometimes he accidentally walks back into 10 Downing Street, kicks off his oxfords, loosens his tie and pours a Baileys and blackcurrant before even noticing the actual elected incumbent staring back at him across the room, angrily tapping her kitten heeled slippers.

Today’s headlines have Blair warning Germans in newspaper Die Welt about the dangers populism poses for the continued existence of the EU. (Do the Germans of all people need that lesson from him?) 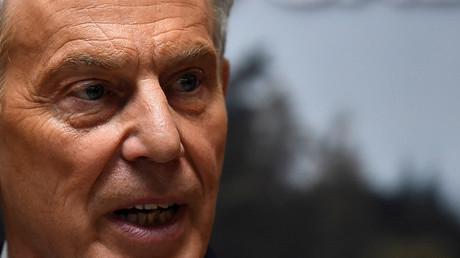 Blair himself first came to power by dragging his left-wing party to the right, and tapping into populist policies. He was Prime Minister for a decade, which is all the warning about populism anyone should need.

On the other hand, Blair as Prime Minister was absolutely inspirational in his willingness to ignore popular movements in order to show his iron-leadership. When one million people turned up on the streets of London begging him not to go to war in Iraq, the popularity of that movement didn’t sway him one iota.

Blair has also been holding forth on immigration saying tensions occur from non-EU migration “when people aren’t sure the people coming are sharing our values” – particularly from majority-Muslim countries.

Non-EU migration has in no small part also been caused by people fleeing the hard end of foreign policy pushed by Blair and his contemporaries. The one value people from majority-Muslim countries, and all the other ones, do share is a general dislike of being blown up in wars.

Peter Mandelson, arguably Blair’s closest advisor back in the day, also recently admitted that the Labour government of the early 2000s sent out what he called “search parties” to find as many immigrants as they could to bring to Britain.

So whichever kind of immigration is annoying you this week, there’s a good chance Blair was behind it at some point.

That’s probably because Blair is politically greased up and focused on sliding himself into the center of the Brexit debate at the moment.

He told Die Welt: “Let’s be clear: the anxieties of the British people that led to Brexit are not confined to Britain.”

Luckily the anxiety that Blair could return to elected office is confined solely to Britain.

Tony Blair has blasted Labour over its handling of Brexit

Let me remind you that during his election campaign in Sedgefield in 1983, Tony Blair pledged that Labour would negotiate Britain’s withdrawal of the EEC

The man is a liar and a hypocrite pic.twitter.com/GGDUYFr1NE

What he wants ultimately is a second referendum, one that gets the ‘right’ answer this time.  “Once we know the alternative, we should be entitled to think again, either through Parliament or an election or through a fresh referendum.”

Well he doesn’t know the alternative, but he seems to have made his mind up.

I can draft the question Blair would like right now: ‘Should Britain stay in the EU: Yes or Yes?’

There’s an inherent point that Blair, and all the Blairs continually fail to grasp. Part of the reason people voted for Brexit is in no small part because of establishment political figures like him.

If he wasn’t unpopular enough when he stepped down as Prime Minister in 2007, then his wilderness years of half million dollar speeches and advising of central Asian autocrats is hardly giving him the public standing to reverse the democratic will of a nation. Blair’s toothy smile (more grimace these days) adorning the debate around Brexit may well have very much the opposite outcome that he is aiming for.