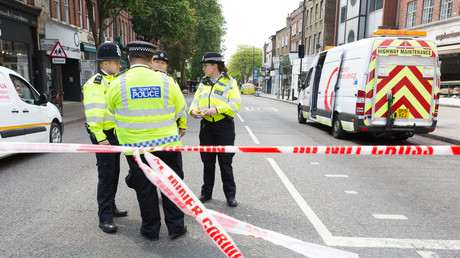 A one-year-old baby boy is fighting for his life after being stabbed alongside his mother on Monday evening in London. His mother’s injuries are understood not to be life-threatening.

In the latest incident of violent knife crime to rock the capital, the woman in her 30s and her infant son were stabbed in the borough of Hounslow. A manhunt is underway and residents have reportedly been warned to stay indoors while the attacker remains on the loose.

Police and paramedics were called at the scene of the attack at around 7.12pm on Monday.

One witness told Sky News: “I heard a lot of screaming and crying, it was quite distressing to hear. It’s a family, they’re new to the area, they’ve not long moved in.”

The area was placed on lockdown, with one person telling Get West London: “We have been told by police to stay in and lock doors. The estate is taped off, and an armed response [unit] is present.”

No arrests have been made, and police say they are looking for a man known to live at a residential address in Feltham. It is understood that the parties involved in the incident knew each other.