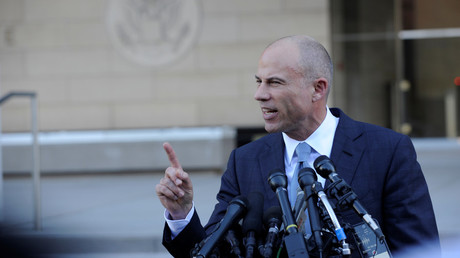 Michael Avenatti has followed through on a promise to name a third woman with misconduct accusations against Supreme Court nominee Brett Kavanaugh, but the timing before Thursday’s confirmation vote has been slammed as political.

The lawyer, who represents adult film actress Stormy Daniels, said at the weekend that he had“significant evidence” that Kavanaugh participated in multiple gang rapes while in high school. On Wednesday, Avenatti released an explosive letter which he sent to Mike Davis, the Chief Counsel for Nominations on the US Senate Committee on the Judiciary. In it, Avenatti names the third woman as Julie Swetnick.

Below is my correspondence to Mr. Davis of moments ago, together with a sworn declaration from my client. We demand an immediate FBI investigation into the allegations. Under no circumstances should Brett Kavanaugh be confirmed absent a full and complete investigation. pic.twitter.com/QHbHBbbfbE

Swetnick claims that both Kavanaugh and his close school friend Mark Judge engaged in “highly inappropriate” conduct which included being “overly aggressive with girls”. She also accuses Kavanaugh of being a “mean drunk” who made jokes “designed to demean, humiliate and embarrass” girls.

Most explosively, Swetnick claims Judge and Kavanaugh were part of a group that spiked drinks and got girls inebriated so that they could be “gang raped” by a train of boys. “I have firm recollection of seeing boys lined up outside rooms at many of these parties waiting for their ‘turn’ with a girl inside the room,” she says in a sworn declaration. Swetnick also says she herself was a victim of one of the gang rapes and was “incapacitated without my consent and unable to fight off the boys raping me”.

READ MORE: ‘Cut off that pesky penis of his’: Satire and reality blur as Kavanaugh debacle drags on

But the timing of the accusations, released by Avenatti just before a Senate Judiciary Committee vote which has been scheduled by Republicans for Friday, has raised some eyebrows. Nonetheless, reports suggest that the committee has responded to Avenatti and “immediately started looking” into Swetnick’s claims.

.@Arianedevogue reports: Judiciary Committee has responded to Avenatti, per committee source, saying investigators have “immediately started looking” into the allegations & asked if his client Julie Swetnick is willing to speak to investigators and when she might be available…

Some on Twitter have dismissed Swetnick’s claims as far-fetched, suggesting it was odd that she and others continued showing up at parties where they knew a gang of serial rapists were terrorizing girls.

So according to Julie Swetnick’s accusation we’re supposed to believe that a gang of serial rapists were terrorizing young women at house parties and not only did no one ever report it but she KEPT GOING TO THE PARTIES? Oh and the FBI missed this on 6 background checks? Really?!

Julie Swetnick: “Oh, yeah. I totally saw them lined up to gang rape a girl at a few parties.”
Normal Person: “Wait. FEW?? You kept going to them?”
Julie Swetnick: “TOTALLY! I was even the girl being raped once!”

Guys, this is bullshit.

If you attend one party where a gang rape occurs and fail to report such behavior, you are part of the problem. If you go back to numerous parties where same criminal violent gang rapes occur, you should be shamed for your inaction.https://t.co/VpYUh8rXYX

Others have expressed total faith in Swetnick and praised her for coming forward.

I believe it is time for Brett Kavanaugh to withdraw his name.

These brave women are risking their own lives to save those of others. I believe Dr. Ford. I believe Deborah Ramirez. I believe Julie Swetnick.

Gang rape — “running a train” — is not uncommon in high schools and colleges today. It is in my book American Girls; I heard about it from teenage girls all over the country. Today. https://t.co/BQ6xM1966a

National Security lawyer Bradley P. Moss tweeted that he had “no idea” if Swetnick is telling the truth, but noted that submitted a sworn affidavit carries with it “criminal liability” if she perjured herself.

While Republicans have suggested that the recent spate of allegations against Kavanaugh are politically motivated and designed to prevent him from being confirmed to the Supreme Court, Democrats have said they favor an FBI investigation into the accusations before Kavanaugh can be confirmed — something which Republicans say is just a delay tactic.

I have no idea if Julie Swetnick is telling the truth. I can say this: submitting a sworn affidavit carries with it criminal liability if she perjured herself.

Also, as a clearance holder, giving perjured statements would be a career-ender. Take that for what it’s worth.

Responding to the new allegations, Kavanaugh said they were “ridiculous” and “from the Twilight Zone,” adding “I don’t know who this is and this never happened.” The White House has stood firmly behind Kavanaugh since the allegations of sexual misconduct started to become public. On Twitter, Trump himself described Democrats’ efforts to scupper Kavanaugh’s nomination as a “con job” designed to ruin a good man. Trump also blasted Avenatti personally on Twitter, calling him a “third rate lawyer” who makes “false accusations” and is “looking for attention”.

Avenatti is a third rate lawyer who is good at making false accusations, like he did on me and like he is now doing on Judge Brett Kavanaugh. He is just looking for attention and doesn’t want people to look at his past record and relationships – a total low-life!