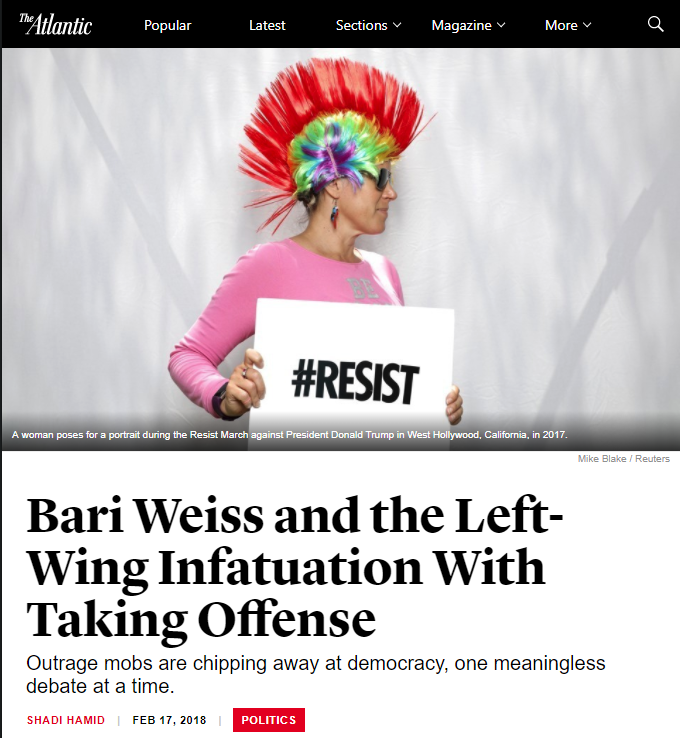 An opinion piece in The Atlantic (2/17/19) takes issue with the phenomenon of people sharing their opinions: “Twitter’s socially conscious denizens probably only realized they should be outraged at Weiss after they saw other people being outraged.”

Which journalists need protecting and which are deemed expendable tells us a lot about media priorities.

New York Times editorial page deputy editor Bari Weiss—a boilerplate neocon warmonger, anti-Arab racist, and sexual abuse soft-peddler—got into hot water when she sent a tweet last week praising Asian-American Mirai Nagasu (born in California) for being “an immigrant” who “got things done.” When several people noted not only that Nagasu was born in the US–and thus not an immigrant–but that the assumption that Asian-Americans are inherently foreign is a pervasive, deeply toxic trope that should be apologized for, Weiss had a classic Twitter meltdown, ending in claims that animosity leveled at her was “another sign of civilization’s end.”

Right on cue, fellow blue-checkmark Serious People rushed to her defense, most prominently—and uniformly—from the ultimate arbiter of seriousness, Atlantic Magazine. The centrist outlet published not one but two articles on the topic of Twitter being mean to Weiss: “The Excesses of Call-Out Culture“ by Conor Friedersdorf (2/19/18) and “Bari Weiss and the Left-Wing Infatuation With Taking Offense” by Shadi Hamid (2/17/19).

Other Atlantic staff writers chimed in with their outrage on Twitter. “Not taking offense easily is as important a moral commitment—and perhaps even more productive of mental health—as not giving offense carelessly,” The Atlantic’s David Frum tweeted out in solidarity.

The Atlantic’s Julia Ioffe added in an exhaustive five-tweet thread:

Thread: I love Bari Weiss. I don’t always agree with her, but I have always found Bari to be a brilliant, interesting, hilarious, and engaging person. I hate Twitter. It’s a useful resource but is also home to roving bands of echo-chamber outrage. On both sides.

Extreme-centrist Ioffe was certain to get the “both sides” in there, just so people know how Serious and Reasonable her perspective was.

In response to a well-paid editor under siege from mean people on Twitter for saying something mindlessly racist, then doubling down and playing victim, one of the nation’s most influential magazines marshaled its tremendous influence and intellectual resources to defend her.

As FAIR has noted several times before (9/26/18), two journalists, as well as scores of protesters, faced decades in federal prison for simply being in the proximity of a few broken windows during Donald Trump’s January 20 inauguration in Washington, DC. This official action sent “a chilling message to journalists covering future protests,” according to the Committee to Protect Journalists, a nonprofit focusing on press freedom. How many articles on this unprecedented attack on free speech did The Atlantic run? How many hot takes defending Santa Fe Reporter staff writer and editor at the New Inquiry Aaron Cantú, facing 75 years in federal prison, were penned by Friedersdorf, Frum, Ioffe and Hamid? How many did they write about independent photojournalist Alexei Wood, who was threatened with a similar sentence before being acquitted by a jury last December?

Zero. None. Not one mention of Cantu or Wood in The Atlantic since their detention and indictment in early 2017.

Actual threats on journalists—with actual prison sentences and actual legal fees resulting in an actual chilling effect—are met with a yawn, because those affected aren’t in the club, or in favor with the Extreme Center’s positions on perma-war, Israel and Russia fearmongering; while mild Twitter-dragging by people with 344 followers and rose-emoji AVIs is a national crisis in urgent need of all hands on deck.

When Nation and Outline contributor Sean McElwee confronted Atlantic staff writer Conor Friedersdorf about an unrelated pout session over “free speech” attacks by other obscure leftists, while he ignored the official prosecution of over 100 people for unrest during Trump’s inauguration, Friedersdorf responded:

It is not possible for me to write about *every* free speech abrogation. That I did not write about the one you care about most does not mean I “ignored” it.

And yet ignore it he did, and continues to do. As do Frum, Ioffe, Hamid and Atlantic editor-in-chief Jeffrey Goldberg. Because the issue isn’t “free speech” or the problems with “PC” online culture; it’s simply the pundit class protecting its own—while leaving those not in the Serious Person club out to dry.