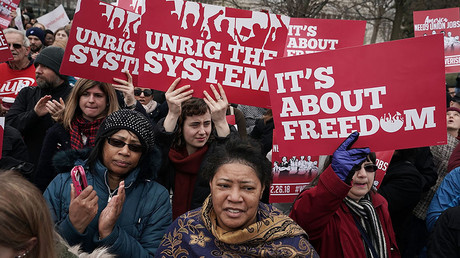 Protesters gathered before the US Supreme Court as the nine Justices considered a controversial labor union case. The decision could damage unions’ finances and their impact on elections, in which they tend to back Democrats.

Janus vs. American Federation of State, County and Municipal Employees will determine whether it is constitutional to require government workers to pay fees to unions for the benefits secured through unions’ collective bargaining, even if they opt out of membership.

With millions of dollars at stake, supporters of both sides of the argument protested Monday.

The plaintiff,  Mark Janus, like all non-union public employees is currently legally required to pay fees to his union to cover the cost of representing him because he is covered under a collective bargaining agreement negotiated by the American Federation of State, County and Municipal Employees union.

The arrangement, known as the ‘fair share fee’, was established in 1977 by the Supreme Court and exists in 22 states.

But Janus, a social worker, is working in tandem with several conservative and business interest groups which want to make it possible to benefit from a collective bargaining agreement without paying union fees. The plaintiff argues that his union participates in political causes which he does not agree with.

The data is clear: When labor unions suffer, wages for ALL workers go down and a greater share of wealth goes to the elite. That’s why right-wing millionaires are bankrolling #JanusvAFSCME. https://t.co/WPaYFlrcxH

Labor leaders are concerned that union members could decide to stop paying fees if they could access the benefits of union membership without paying dues. If the court rules in favor, it could severely dent the financial power of labor unions in the US.

The cost of public-sector workers opting out of union membership in New York could total more than $110 million, according to pro-business think tank The Empire Center.

The timing of the case is particularly significant given the recent arrival of the conservative Supreme Court Justice Neil Gorsuch, who was appointed by President Donald Trump in 2017. In 2016 on a similar case,  the court split 4-4. The presence of Gorsuch on the bench this time around could swing the balance in favor of conservative interests.

The American Civil Liberties Union, which supports the labor unions’ position, has argued that ‘fair share’ fees do not violate non-union workers’ rights.

Union membership stood at 10.7 percent in 2017 compared with 20.1 percent in 1983, according to the Bureau of Labor Statistics.