UN and UK authorities are blaming social media for enabling illegal migration into Europe, claiming companies are not doing enough to crack down on smuggling activity even as charities claim they are focusing on the wrong problem.

An explosion in migrants attempting to illegally reach the UK by crossing the English Channel in small boats has European and UN authorities scrambling for someone to blame. UK Home Secretary Sajid Javid declared the crossings a “major incident” and was forced to curtail his South African holiday to consult his French counterpart on how to address the issue before it spirals out of control.


With more than 221 migrants attempting the crossing since the beginning of November and almost 100 of those since Christmas, the fear is migrants will begin dying at sea in the north as they have in the Mediterranean, where more than 17,700 people have perished trying to cross into Europe in the past four years. Many of the migrants who have washed up on UK shores have been suffering from hypothermia.

International Organization for Migration spokesman Leonard Doyle claims migrants are being enticed from their homes by social media postings and that the companies are not doing enough to stop the problem. He lamented a world in which a child in a village “with nothing but a cracked smartphone” can meet up with a people-smuggler while having “no sense that this is going to end up in their prostitution, their slavery, their murder, their drowning” – perhaps forgetting the child is still holding a smartphone and can, if desired, access that information quite easily. 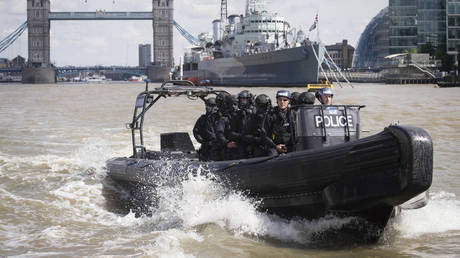 French charity Care4Calais pointed out that migrants wouldn’t be leaving their homes if they didn’t feel persecuted. Help Refugees, another Calais migrant charity, blames European governments for failing to provide truthful information, driving migrants to social media where smugglers can prey on them.

“The reason so many people are risking their lives is because of the lack of state-funded information – knowledge of their asylum rights and so on – so they cannot make informed decisions,” field manager Josh Hallam said, claiming criminal gangs are merely “filling that gap.”

“People are not coming because they think it will be an ‘opportunity.’ People are fleeing army conscription in Eritrea, war in Syria and Afghanistan, all of the political issues in Ethiopia.”

The IOM claims people-smuggling is the third-largest industry in the international criminal underworld. According to Europol’s Migrant Smuggling Centre, 90 percent of migrants coming to the EU do so with the help of a criminal organization.

The migration blame game follows the ratification earlier this month of the controversial UN global migration pact, which saw several countries back out of signing at the last minute and has sparked internal turmoil in many signatory nations.