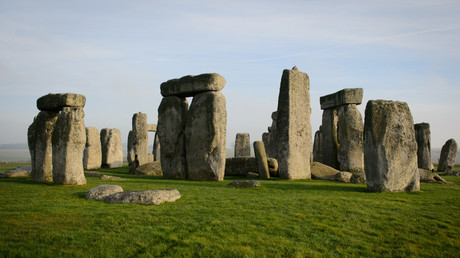 Engineers working for Highways England may have inadvertently damaged a 6,000-year-old platform which may hold the key to answering the question: Why was Stonehenge built in the first place?

Preparatory drilling of a three-meter-deep hole (10ft) through a man-made platform of flint and animal bone at the Blick Mead site, roughly a mile from the standing stones at Stonehenge, has caused uproar among the archaeological community working in the area and studying one of mankind’s enduring mystery structures.

Also on rt.com
Stonehenge builders herded animals all the way from Scotland for lavish Neolithic feasts


Blick Mead is part of the Stonehenge and Avebury UNESCO world heritage site. Archeologists were already concerned about the possibility that the works could cause the local water table to drop, damaging artefacts and remains in the area.

The stone platform that, reportedly damaged during the drilling, contained the hoof prints of an aurochs, a type of giant prehistoric cow which is now extinct.

“This is a travesty. We took great care to excavate this platform and the aurochs’ hoofprints,” David Jacques, professor of archaeology at the University of Buckingham, who discovered the site 12 years ago, said of the reported damage.

“We believe hunters considered this area to be a sacred place even before Stonehenge. These monster cows – double the size of normal cattle – provided food for 300 people, so were revered.”

It may be that there are footprints here which would be the earliest tangible signs of life at Stonehenge. If the remains aren’t preserved we may never be able to understand why Stonehenge was built.

Highways England is scheduled to meet with the archaeological team led by Jacques on Thursday, but has denied any wrongdoing or accidental damage caused by its operations.

“We are not aware of any damage being caused to archaeological layers. We notified Prof David Jacques of the locations of our water table monitoring, and have adhered to guidelines in carrying out the work. We have also kept Prof Jacques informed and we will be meeting him on site [on Thursday],” a Highways England spokesperson said.

Highways England is currently constructing a highly-controversial £1.6bn ($2bn) upgrade of the A303 road, which links the M3 from London to the M5 in the south west. The government plans to build a 1.9-mile (3km) tunnel past Stonehenge to preserve the local landscape by hiding the busy arterial route.