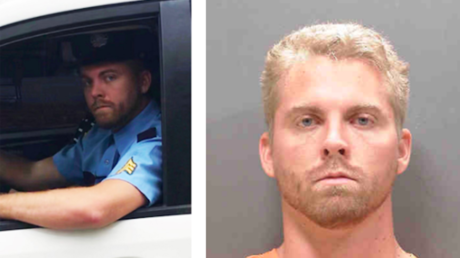 What was originally planned as a hilarious April Fool’s prank seriously backfired for one YouTuber after he was arrested for impersonating a police officer in Sarasota, Florida.

Charles Ross, 25, had donned a (very convincing) police uniform and approached a mother carrying two young children at a car park on the pretense of ticketing her for traffic charges. However, she questioned him about his claims and Ross left, before returning soon afterwards in his car and arguing with her a second time.

According to police, Ross was carrying a baton in his belt at the time of the confrontation. Officers released CCTV of the encounter online.

Ross runs a YouTube channel called ‘Ross Creations,’ featuring footage of his various pranks, which has over a million subscribers. His most-watched videos include him sneaking hot dogs into other people’s pockets, and a “one-arm girl offended at people with two arms.”

Speaking to the press about the arrest, Sarasota County Sheriff Tom Knight described Ross’s behavior as “brazen” and said that he had donned a police uniform, which should be “earned, not just worn.”

“We don’t think it’s funny,” Knight said, adding that impersonating an officer is a felony.

The sheriff said that police in his and other areas have already encountered Ross over his pranks, which Knight said ranged in seriousness and took up increasing amounts of police time. Addressing Ross directly, the sheriff said: “Your adolescent behavior is becoming old, it’s tying up our resources, it’s costing money.”

Also on rt.com
Struggling to stay afloat in China: RT’s Boom Bust on rivals taking a bite out of Apple


Ross was charged with impersonating an officer, and has been released on a $10,000 bond.