The silencing of critics of Israel using anti-semitism as the pretext is far from restricted to the current wave of attacks on Jeremy Corbyn and his Labour party. It is now used to intimidate anyone who steps out of line on Israel. Once we raged against the conflation of anti-semitism and anti-Zionism. We have so lost that battle that it is now standard operating procedure for Israel’s apologists to conflate anti-semitism with simple criticisms of the current ultra-nationalist Israeli government.

Here is an illustration of our defeat, reported in the Israeli daily Haaretz. It concerns what would in other circumstances be a fairly standard satirical cartoon: this one published by the German newspaper Süddeutsche Zeitung about Israel winning the Eurovision song contest last week. Israeli prime minister Benjamin Netanyahu is shown on stage dressed as Israel’s winning singer, Netta, and proclaiming “Next year in Jerusalem!”. 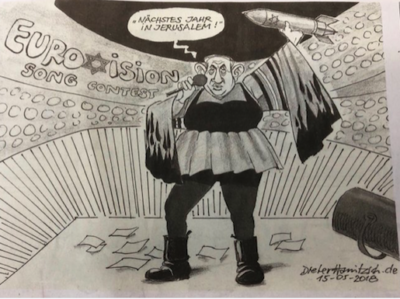 After the usual outcry, the cartoonist, Dieter Hanitzsch, was sacked. No Charlie Hebdo-style concerns about free speech on this occasion, it seems.

As has become familiar in these cases, Wolfgang Krach, editor-in-chief of the Süddeutsche Zeitung, seemed unsure himself whether the cartoon was actually anti-semitic. But presumably he thought it better to fire the cartoonist just to be on the safe side. Let’s hope Hanitzsch can take Krach and his newspaper to the cleaners at a labour tribunal.