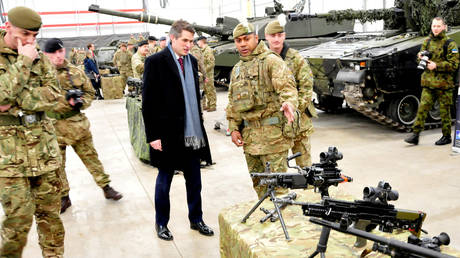 UK defense chief Gavin Williamson cited a Russian resurgence in claiming the British military must project ‘hard power’ worldwide after Brexit. Analysts, who see Britain as only a regional power, have greeted this with skepticism.

“Brexit has brought us to a great moment in our history. A moment when we must strengthen our global presence, enhance our lethality, and increase our mass,” Williamson declared in a speech at the Royal United Services Institute, a military think tank, on Monday. He added the UK and its allies must get ready “to use hard power to support our global interests,” specifically to counter China and Russia.

Williamson justified his vision of a post-Brexit “global Britain” by arguing that Russia is “resurgent” and “rebuilding its military arsenal.”

Also on rt.com
We must be ready to use ‘hard power’ against Moscow and Beijing – UK defense chief


While the statement was bold indeed, many doubt the UK will actually live by the minister’s words. In a post-Brexit reality, Britain will certainly have bigger things to worry about than some military endeavors abroad, former US diplomat Ted Seay believes.

“I would be terribly surprised if Britain decided to take that course,” Seay told RT, adding that sorting out trade relations after Brexit will be challenging enough without a militaristic spending spree. Britain is already “spending too much on the military infrastructure systems and personnel,” he said.

They are not really able to pay the pension obligations that they have to previous service members, so I think this is a very misleading quote by the Secretary of Defence.

London certainly has other things to spend its austerity-curtailed budget on instead of the military, from fixing the housing crisis to the “dysfunctional” public transport system, agrees Chris Nineham from the Stop the War Coalition. Increases in armaments production won’t actually be helpful to the economy, as the number of people employed there is quite small.

“This isn’t so much about jobs or industry, this is about our actual foreign policy first and foremost. And it seems to me this kind of idea of ‘enhancing our lethality,’ as Williamson charmingly puts it, and projecting more ‘hard power’ is, in foreign policy terms, a disastrous position and not a good way to go,” Nineham said.

Though Williamson has dreams of the UK acting around the world unilaterally, the last time Britain waged war on its own was in 1982, when it defeated Argentina in the dispute over the Falklands Islands. Even that conflict resulted in heavy losses by the Royal Navy. Since then, the British military has mostly operated within NATO or US-led coalitions, such as in Afghanistan and Iraq.

“The UK has not been more than a regional power for quite some time. And even then, whatever force projection it had was multiplied by being a member of NATO,” Seay argues.

“The UK already has one of the largest defense budgets in the world, with its defense spending per capita already very much higher than Russia or China,” former British Army officer Charles Shoebridge, now a security analyst, told RT.


Williamson is thinking in terms of “vanity projects” such as warships and overseas bases, Shoebridge explained, rather than areas like cyberwarfare that could arguably provide more effective military leverage.

“It’s an irony largely missed by many UK commentators that at the same time as Williamson speaks of the dangers of a ‘militarily resurgent Russia’ he is suggesting the UK after Brexit will itself be a militarily resurgent power that, far from the UK, will threaten the interests of Russia and China,” Shoebridge told RT, making a case that Williamson’s vision is not only not achievable, given competing demands on the UK government’s finite resources, but also not desirable.

Williamson’s words and vision are not actually a product of Brexit, but rather a sign of Theresa May’s government wanting to “compensate” for the whole divorce turmoil, political scientist John Laughland believes. A similar attitude was shown in the infamous Skripal affair, when the UK tried to show off the supposed power of its intelligence services.

“Britain is the most aggressive of all the European countries in its anti-Russian rhetoric,” Laughland told RT, adding that Williamson’s statement was a rather “stupid” thing to say in regards to putting China and Russia into the same category. While Moscow has been London’s favorite bogeyman for quite some time and relations between the two countries are quite bad, Britain enjoys strong economic ties with China – and antagonizing Beijing is not a smart move.