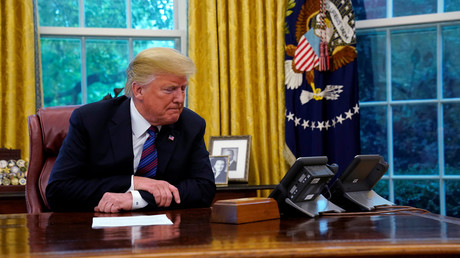 On Wednesday, every mobile phone in the US will receive a message from President Donald Trump, and the only way to stop it is to switch it off (or flee into the wilderness). Although three people want a court to shield them.

Strangely enough, the message will have nothing to do with politics. Instead, it’s a test of a nationwide “presidential alert”, a system that the Federal Emergency Management Agency (FEMA) intends to use in case of a crisis affecting the entire nation. Like an imminent nuclear missile blast – the Hawaiians have a lot to say about it.

REMINDER: Next Wednesday 10/3 at 2:18 PM EDT, we will conduct a nationwide test of the Wireless Emergency Alert system, in coordination w/@FCC. You’ll get a message box on your phone with a tone & vibration. This is not a text & your phone number is not shared with anyone. pic.twitter.com/7gkuWJQoXO

FEMA says that starting 2:18 p.m. EDT every working cell phone within coverage should receive a notice that reads: “THIS IS A TEST of the National Wireless Emergency Alert System. No action is needed.” Unlike most other alerts sent by the agency, this one cannot be opted out of, so short of turning the device off or blocking the wireless signal, there will be no way to avoid it. The test warning will also be broadcast through radio and television, interrupting usual programming, about two minutes later.

Early into Trump’s presidency the idea that he can sent whatever he want to pretty much all of the country through FEMA’s infrastructure came as a shock to many Americans. Almost two years later it doesn’t seem more appealing to some folks. Three New Yorkers went as far as suing a federal court to have the test blocked, because, they argue, it violates free speech and constitutes an unconstitutional seizure of their electronic devices.

Others take a simpler path and simply vent off their frustration on the social media.

I must admit, I’d really prefer NOT to receive a presidential alert on my phone! There’s something very creepy about it! It makes the country feel more like a dictatorship that way. pic.twitter.com/i23rx69V2D

This “TrumpRussiaGOP Presidential Alert” is the most blatant act of forced Presidential Propaganda and takes away our right to the privacy we pay in cellular service! Nearly as bad as $inclair Broadcasting’$ Propaganda TV, but one CAN turn it OFF! https://t.co/w7EmAngthy

My reply to the news the the #FakePresident is going to text us all this week. If there’s any chance this guy can use the system for political purposes I want no part of it. He basically does he wants and no one stops him. @fema? Can you answer? pic.twitter.com/9IYrndJ6bx

Current and former US officials have been doing their best to assure that their infrastructure would not be hijacked by the ‘Twitterer-in-chief’ to force a nationwide subscription on his feed.

“It should be reserved for true situations, true emergencies when we need to get the public’s attention,” former Secretary of Homeland Security Jeh Johnson told CBS This Morning program. “This is something that should not be used for a political agenda.”

FEMA’s Antwane Johnson alluded to “laws, policies and procedures that are in place, other protocols to assure that the system is used in accordance with its intended use as defined by the law,” but stopped short of promising to keep Trump away from the agency’s big ‘send to all’ button.

The test was initially scheduled for September 20, but was postponed due to Hurricane Florence.