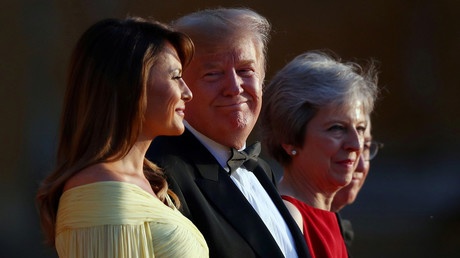 Donald Trump’s reasoning has long been a mystery, fought over by others trying to work out the president’s motives. Today, it was the turn of UK commentators to battle over why Trump slammed Theresa May’s Brexit deal.

Was it ‘America First’ politics, did he copy what Nigel Farage said on Fox News, or was it a display of his infamous bad-deal detection skills? Either way, the UK prime minister will not be thanking Trump after he labeled her UK withdrawal deal as ‘great for the EU.’

Sky News’ Faisal Islam queried whether Trump had watched his old friend Farage on Fox and Friends – reportedly one of the president’s favorite shows. The query was also made into a joke by the account of the BBC’s ‘Have I got News for You’ show.

Donald Trump says PM’s Brexit deal is bad for UK/US trade, although the source of this controversial analysis remains a complete mystery. pic.twitter.com/jWeM7TznT1

Trump’s latest Brexit comments are comparable to those of Barack Obama in the lead up to the EU referendum. Then-president Obama, at the behest of David Cameron, said that the UK would “be at the back of the queue” should they require a post-Brexit trade deal.

Brexiteers, both MPs and their supporters in the media, repeatedly attacked Obama for ‘interfering’ in the referendum.

Though with Trump, the UK media has largely been muted in their criticism, perhaps a sign that they too share the president’s reservations.

US Presidents on Brexit

Obama: “back of the queue”
Brexiteers: outrage at foreign interference

Trump, popular already among many in the Tory party, was hailed by some MPs for his intervention. Michael Fabricant MP tweeted that Trump’s analysis was “spot on.”

The editor of the right-wing Spectator magazine posted that Trump’s comments amounted to an expression of “dismay” that “May’s deal rules out proper free trade deals with new allies.”

Trump is saying (crudely, as ever) what other would-be trade partners are thinking. May’s deal rules out proper free trade deals with new allies, to their dismay. Tony Abbott is also frank about how Australians are baffled and saddened. The “Global Britain” agenda is being buried

Nelson’s assertion was challenged by trade expert David Henig, who argued that Trump’s intervention was “pure politics,” and an attempt to get the “UK to move from EU to US regulation.”

No, Trump’s comments (as per Abbott as well) are pure politics. There is a certain right-of-centre group who want the UK to move from EU to US regulations. It isn’t uniform among the right, and non-existent in the centre and left. https://t.co/Wdn8Bzb1oO

Labour MP and ardent Remainer David Lammy echoed that position, warning that Trump “does not act like a UK ally” and that “he wants us isolated and vulnerable in future trade negotiations.”

Whatever the reasoning behind Trump’s comments, it’s unlikely that May will be holding hands with him any time soon.