America might be in its final days of democracy, left-wing documentary filmmaker Michael Moore has warned, noting that the constituency of old white men who have long made decisions for the country are a “dying dinosaur.”

Speaking at the Italian premiere of his new film “Fahrenheit 11/9” in Rome on Saturday, Moore said that democracy is an incredibly fragile thing, especially in today’s political climate. 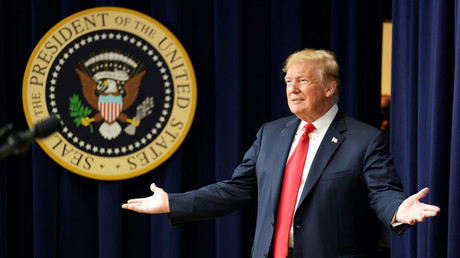 “Literally, someone like Trump or [Italian Deputy Prime Minister Matteo] Salvini can get behind the wheel of the car of democracy, and drive it right off the cliff, and that’s what I’m warning against here,” he said, according to the Hollywood Reporter. “We could be in the last days of democracy as we know it, and we need to fight against that as much as possible.”

Change, he said, can occur very quickly in a democracy, referencing Hitler’s rise to power in Germany. “There is no self-correcting mechanism in democracy.”

The filmmaker, known for his unapologetically critical views of US President Donald Trump and former President George W. Bush, went on to state that voter demographics are changing rapidly, with two-thirds of people who are eligible to vote being either women, people of color, or young adults.

“These are the last days of the dying dinosaur, the old white man who has been making the decisions since the beginning of our time.”

Moore rose to fame in 2004 when he released the film “Fahrenheit 9/11,” which takes a critical look at Bush’s presidency, the War on Terror and its coverage in the media. His new film “Fahrenheit 11/9” is aimed at “bringing Trump down” ahead of the November mid-term elections, he told “Real Time with Ball Maher” in June.