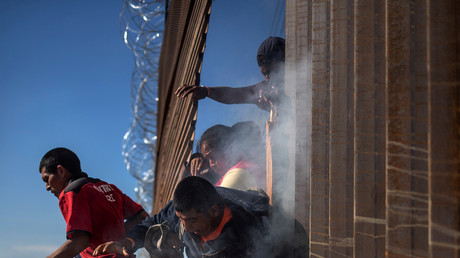 Actress and activist Alyssa Milano has lashed out at US President Donald Trump on Twitter over the treatment of Central American migrants at the country’s southern border, calling him a “piece of sh*t” and an “evil creature.”

US border patrol guards resorted to using tear gas to push back a group of migrants who climbed fences in an attempt to breach the border after sanctioned crossings were temporarily suspended at the country’s busiest legal point of entry.

You tear-gassed women and children, asswipe! And on Thanksgiving weekend, you piece of shit, asshole, motherfucking, evil-creature-person!! https://t.co/ngaAlnhWa0

Large groups of migrants scaled fences and broke holes in the concertina wire which had been erected to keep them at bay. Demonstrators also threw rocks and other projectiles as children as young as three were caught up in the mayhem. Mexican authorities later said that they would be deporting at least some of the people involved in the attempt to rush the border “illegally” and “violently.”

Incensed by the emotional scenes, american actress Alyssa Milano hit out at Trump. “You tear-gassed women and children, asswipe! And on Thanksgiving weekend…” she tweeted, adding a slew of insults and calling him a “motherf***ing, evil-creature-person.”

Milano’s outrage also prompted accusations of hypocrisy when it was pointed out that border agents had used pepper spray to repel rock-throwing migrants at roughly the same location and same time of year in 2013, when former president Barack Obama was in office.

2013: “A group of about 100 people trying to illegally cross the border Sunday near the San Ysidro port of entry threw rocks & bottles at U.S. Border Patrol agents, who responded by using pepper spray & other means to force the crowd back into Mexico, federal officials said.” pic.twitter.com/78SGfElqMQ

Perhaps the better question is who have we been and why didn’t more people notice?

The Obama administration did the same thing. Not a peep.

The answer lies in history, @Alyssa_Milano. Those of us who’ve worked & reported on Central American predicted this violence. We know Trump’s violence continues and expands the violence against Central American refugee children perpetrated by Obama who, in turn, continued Bush’s. https://t.co/THUSO5bxIR

Some also wondered why Milano and other Hollywood stars were so quiet about other questionable Obama administration policies, including the bombing of seven different countries.

When Bush/Clintons/Obama led a NATO bombing around the world and killed millions of women and children, you were silent. And you still support them obviously. Are you “Selectively good person”?

Others called Milano out for expressing her feelings using foul language and suggested that if a conservative had used similar wording, Twitter would have suspended the account.

I am highly offended this @Twitter personality @Alyssa_Milano has used abusive and hateful language toward the President. This can cause violent rhetoric to follow.

My children saw this and wondered how someone could be this evil and disrespectful.

Never mind the hyperbole, can you imagine a has-been actor who directed this sort of abuse at Obama being given a platform on MSM? https://t.co/JuWAAis3fH

A few also helpfully pointed out that Honduras, where many of the migrants come from, doesn’t usually celebrate Thanksgiving.

Oh look it’s the girl from the show Classless. Now she should star in a show called Clueless for thinking they celebrate Thanksgiving. https://t.co/uwr4LkRsTU

On Monday, Trump tweeted that Mexico should deport migrants, many of whom he said are “stone cold criminals” and vowed to “permanently” close off the southern border if necessary. Trump also called on Congress to “fund the WALL” to keep illegally entering migrants out of the US.

Mexico should move the flag waving Migrants, many of whom are stone cold criminals, back to their countries. Do it by plane, do it by bus, do it anyway you want, but they are NOT coming into the U.S.A. We will close the Border permanently if need be. Congress, fund the WALL!