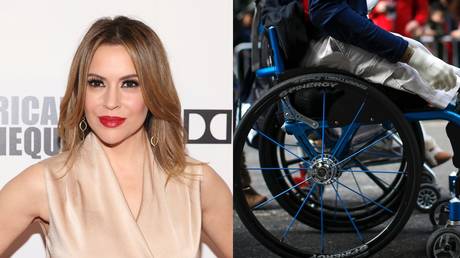 Actress Alyssa Milano waded out of her depth as she slammed the border wall crowdfunding, implying the money should instead go to veterans. She was instantly reminded the campaign was started by a triple amputee vet.

The actress-turned-Democratic firebrand was left red-faced as after she took aim at the crowdfunding campaign to build a border wall between the US and Mexico, now at over $13mn. In a tweet on Thursday, Milano wrote: “Oh, yes! Let’s #GoFundTheWall while not taking care of our veterans. Cool. Cool. Cool.”

It was not long before the tweet ignited a firestorm on Twitter, as many noticed Milano hand’t done her homework, as the GoFundMe page was started by Air Force veteran Brian Kolfage, a Purple Heart recipient, who lost three limbs in a rocket attack in Iraq.

The campaign, with a designated goal of $1bn, started less than a week ago and has already shot up to be one of the five top GoFundMe campaigns ever.

Milano’s fellow Hollywood celebrity and outspoken conservative James Woods led the backlash against her, pointing out who started the fund.

The guy that put this together is a veteran. He’s a triple amputee. Good grief. Stay out of politics.

The guy running it is a triple-amputee v3eteran, you triple-stupe.

Many actual veterans chimed in, tweeting at Milano that they have backed the crowdfunding campaign, while others accused her of preying on the cause she did not seem to care about before.

“Bring Vets up when it’s convenient for you. Any other day you could care less,” one user wrote.

Bring Vets up when it’s convenient for you. Any other day you could care less. #Despicable

What have you done for our veterans in the past year? Besides ignoring this fund raiser is being run by one.

People argued that building the wall and helping veterans are not incompatible tasks and can both be done at the same time.

Milano, one of the most prominent #MeToo movement stars, has been rallying behind virtually every anti-Trump and pro-Democratic cause, often using her Twitter with its 3.48 million followers to spew vitriol at Trump, calling him a “piece of sh*t” and “evil creature” for the treatment of caravan migrants at the US-Mexican border in November.

However, just like this time, back then Milano was accused of hypocrisy and poor research. She was reminded that border agents used the exact same means – pepper spray – to repel rock-throwing migrants at the border when Obama was in office.