Discussing the upcoming summit with North Korean leader Kim Jong-un in Singapore, US President Donald Trump seemingly strayed off-topic to hold out the prospect of a new nuclear deal with Iran.

“Iran is not the same country that it was a few months ago,” Trump told reporters at the White House at a joint press conference on Thursday with Japanese PM Shinzo Abe.

Iran’s leaders are “much different” in recent months, Trump said, and they are no longer looking to the Mediterranean or causing trouble in Syria and Yemen. Trump had accused Tehran of having “malign influence” in the Middle East in early May, when he announced the US would be withdrawing from the JCPOA arrangement negotiated by the Obama administration in 2015. 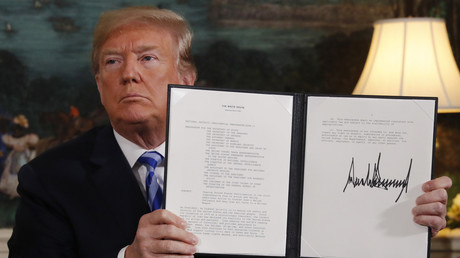 Pointing to the upcoming denuclearization talks with North Korea, Trump said he hoped the Iranian leadership would “come sit down with us and we can make a deal that’s good for everybody.”

“We’re going to be fine, with respect to Iran,” Trump said.

This echoed the remarks he made towards the end of his May 8 speech, when he offered up the prospect of a “new and lasting deal, one that benefits all of Iran and its people.” He had harsh words for the Iranian government at the time, however, accusing it of being a “dictatorship” that has held the country “hostage” for almost 40 years.

In 1979, Iranians overthrew the pro-US monarchy and established an Islamic republic. The revolutionaries held 52 American Embassy staff hostage for over a year, demanding the extradition of Shah Reza Pahlavi, who received asylum in the US. Washington later encouraged Iraqi President Saddam Hussein to invade Iran, starting an eight-year conflict that claimed up to 1.5 million lives.

Trump’s harsh rhetoric and economic sanctions against Iran match the posture he took towards North Korea since taking office, calling Kim “Little Rocket Man” and strangling the country with the policy of “maximum pressure.” His tone changed drastically in recent months, after Kim offered to give up nuclear weapons in exchange for security guarantees and made overtures to South Korea, paving the way for the historic summit with Trump scheduled for next week.