Former Vice President Joe Biden said it would be “totally legitimate” if voters questioned his advanced age if he decided to run for president again in 2020, admitting he was at least “chronologically” old. He’s not the only one.

Speaking at the Economic Club of Southwestern Michigan, Biden said he believed age was a “relevant” question and that “every voter is entitled to know exactly what kind of shape you’re in,” CNN reported. “I think it’s totally appropriate for people to look at me and say if I were to run for office again, ‘Well God darn you’re old’,” he said. 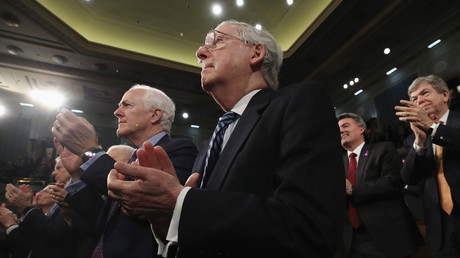 The current occupant of the White House, Donald Trump, was the oldest person ever to be elected to the presidency, at 70. Before him, Ronald Reagan was the oldest to take office at the age of 69 back in 1981.

Trump, now 72, is a spring chicken compared to some long-time current and former members of congress. Take the late Strom Thurmond, a former senator from South Carolina. Thurmond served until he was 100 years old and visibly weak and infirm — and died a few months after his retirement. The recently deceased Arizona Senator John McCain was 81 when he passed away after a battle with brain cancer. In 2009, 92-year-old Robert Byrd (D-West Virginia), was pushed onto the Senate floor in a wheelchair to cast votes. US history is littered with other senators who served well into their late 80s and early 90s.

He added, “Every voter is entitled to know exactly what kind of shape you’re in. You owe it to them. It’s a legitimate question and so I think age is relevant.” These comments came in response to a Q about term limits/mandatory retirement age for Congress & SCOTUS

During the Senate confirmation hearings for FBI director Christopher Wray, journalist Jason Fagone, in a since-deleted tweet, wrote that the combined age of the first four senators to question Wray was a whopping 327. Senator Chuck Grassley was 83, Dianne Feinstein was 84, Orrin Hatch was 83 and Pat Leahy was 77.

More than 50 percent of senators running for reelection in the 2018 midterms are over 65 years old. In fact, the average age of a member of Congress has increased with every new Congress for the past 30 years.

Brett Kavanaugh could be a Supreme Court Justice for 40 years.

Do you think it matter’s to these Republicans who voted “Yes”?

Now, the Senate is supposed to be a “council of elders,” with its name derived from the Latin word for “old man.” What about the House of Representatives, then?

Perhaps surprisingly, when it comes to party leadership, Democratic leaders — who head the party which bills itself as forward-thinking and progressive — are more than two decades older than their Republican counterparts. The average age of Democratic House leadership is 72, while the average age of Republican House leadership is just 48. The House Democrats’ current leader, Nancy Pelosi, is 78 and appears to be extremely resistant to the idea of sitting back and letting someone else take up the helm, despite the fact that a poll taken earlier this year showed she enjoyed only a 29 percent approval rating.

So, what’s the big deal? It’s not that there is nothing to admire in the oldest members of Congress. Many of them appear to still driven, energetic and mentally capable of doing the job. But the problem is in the name. Elected “representatives” are supposed to represent the people — but statistics show that members of Congress are significantly older than the population on the whole. Analysis from Quorum found that there are 44 congressional districts where the age of the representative is more than double the median age of the constituent.

When he was running for president, Trump said he would propose a “constitutional amendment” which would allow for term limits to be imposed on members of Congress. Similar past proposals have all failed to amass enough votes in either the House or Senate, however. After all, why would politicians vote to end their own careers?

There are some signs that things might be beginning to change, however. Politico reported this year that younger, millennial candidates have been flooding the Democratic primaries across the US. But they also face problems that the older, well-known faces don’t have: They don’t have money — and they are branded as too inexperienced and idealistic. Winning elections in America requires money — a lot of it. There are a few candidates who are showing that being an unknown is no barrier, however, if you connect with voters and manage to build a grassroots campaign — the 28-year-old Alexandria Ocasio-Cortez who beat a 10-term incumbent Democrat in the primary for New York’s 14th congressional district being a standout.

Maybe this is why leaders like Pelosi are so resistant to change and to younger upstart candidates like Ocasio-Cortez; because it is them who represent the greatest threat to their power and the status quo.