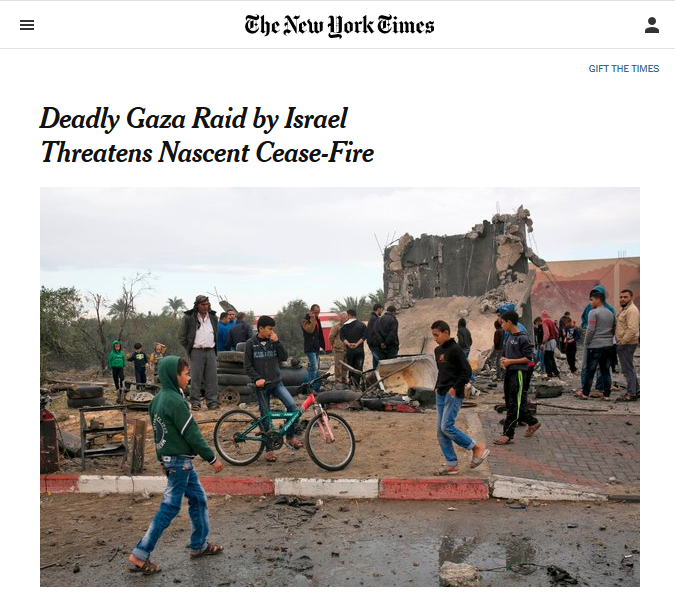 A New York Times article (11/11/18) misstates the number of recent Israeli ground incursions into Gaza by two orders of magnitude.

In a piece headlined “Deadly Gaza Raid by Israel Threatens Nascent Ceasefire” (11/11/18), the New York Times described an Israeli assault near the city of Khan Yunis that killed seven Palestinians as

the first known Israeli ground incursion into Gaza since Operation Protective Edge, in July 2014, set off a seven-week war.

This depiction of the attack as a unique occurrence in recent times is wildly inaccurate. Since the 2014 Gaza War, the IDF has carried out 262 ground incursions into the Gaza strip, according to the UN Office for Coordination of Humanitarian Affairs. Seventy of these have occurred in the past year alone. As Henriette Chacar, writing for +972 Magazine (11/13/18), points out:

Such incursions are a regular occurrence, but are rarely reported by media or known to the general public. Chacar’s article (which was reposted by Lobe Log—11/14/18) quotes retired Israeli Gen. Tal Russo: “Activities that most civilians aren’t aware of happen all the time, every night and in every region.”

Operations by the Israeli military can have a devastating effect on ordinary Palestinians in Gaza. Combined with the ever-changing “buffer zone” declared by the IDF, they make it difficult for nearby farmers to grow crops or raise livestock, worsening the area’s already tenuous economic situation.

Errors like the New York Times’ minimize the degree to which Israel continues to occupy Gaza, despite claiming to have “disengaged” in 2005, and aid a media narrative in which the IDF is reacting defensively rather than acting as an aggressor.

Please tell the New York Times to issue a correction on the frequency of IDF ground incursions into Gaza.