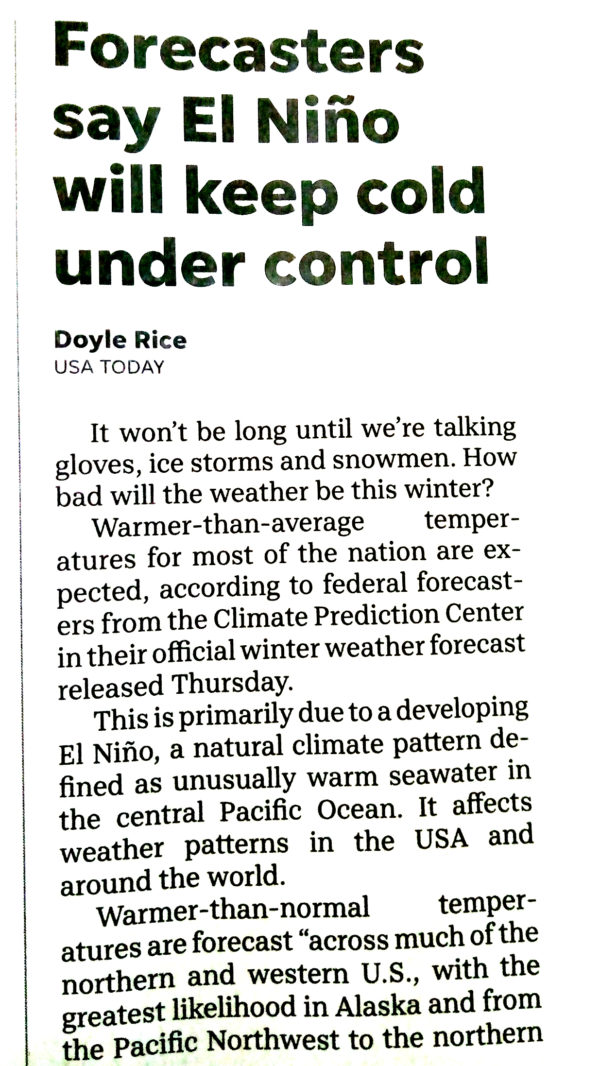 USA Today (10/19/18) presents the upside of temperatures not seen since the Pleistocene Epoch.

The federal Climate Prediction Center foresees an El Niño system, a band of warm water that periodically appears in the Pacific Ocean, developing in time for this upcoming winter. This in turn means that 2019 will likely be the hottest year for the planet in recorded history, since we’re already at near-record temperatures (2018 is on track to be the fourth-hottest year) and El Niño gives a predictable boost to global temperatures.

So how did USA Today (10/18/18) report this latest harbinger of the climate apocalypse? In the print edition (10/19/19), the headline was, “Forecasters Say El Niño Will Keep Cold Under Control.”

The online headline (10/18/18) wasn’t much better: “Winter Forecast: Warmer-Than-Average Temps Expected for Most of USA, Thanks to Developing El Niño.” Actually, mostly “thanks” to the hundreds of gigatons of carbon dioxide humans have released into the atmosphere since 1850–but they say don’t mention it.

“If the prediction comes true, it would continue a streak of unusually warm winters that goes back to the winter of 2015–16,” reports USA Today. Taking the average temperature across the 20th century as “usual,” there hasn’t been a single year in the 21st century when the contiguous United States hasn’t been “unusually warm.”

Please share your messages to USA Today in comments. Remember that respectful communication is the most effective.