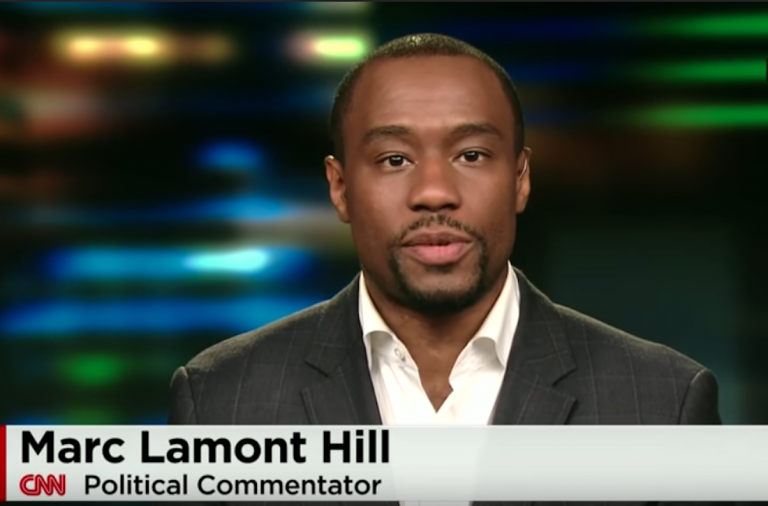 Marc Lamont Hill appearing as a political commentator on CNN

As Marc Lamont Hill delivered his widely discussed speech at the United Nations on November 28, in which he expressed solidarity with the Palestinian people and emphasized the need to protect the human rights and self-determination of all who lived “from the river to the sea,” he probably expected some critical response. What he likely didn’t expect was to be fired from his position as a CNN commentator, and to have his job as a professor at Temple University threatened.

Seth Mandel, editor of the Washington Examiner, accused Hill of having called for Jewish genocide; Ben Shapiro, an analyst on Fox News, called it an antisemitic speech…. The Anti-Defamation League said [his remarks] were tantamount to calling for Israel to be wiped off the map.

Writing in Forward, a Jewish paper that often features a livelier discussion of Israel/Palestine than is found in mainstream media, Bentley Addison (11/30/18) implied that Hill’s words were disavowing the right of Jewish people to live in the region, advising activists for Palestinian rights:

Don’t speak like Marc Lamont Hill. Respect and understand the right of Jews to live in this region…. You must recognize that Jewish culture and peoplehood stem from this land, and we’ve been living there in some capacity continuously for thousands of years.

In the wake of these denunciations, CNN (where Hill was a frequent contributor) decided to sever all ties with the activist and academic. Temple University, where Hill works as a professor of media studies and urban education, is reportedly considering firing him as well.

Many, including Hill himself, have pointed out that this backlash is misguided and at its worst cynically misleading. On Twitter, he insisted that his own position was in favor of a “return to the pre-1967 borders,” a position which would require the state of Israel’s existence, as well as that of a state of Palestine. In his speech, he noted several times that his concern was that “Israel is not a state of all of its citizens.”

Much of the criticism centered on Hill’s use of the phrase “from the river to the sea”—meaning the Jordan River and the Mediterranean Sea—alleging that slogan is unique to Hamas and antisemites. However, as Maha Nassar noted in the Forward (12/3/18), when Palestinians first adopted the phrase in the 1960s, “it was part of a larger call to see a secular democratic state established in all of historic Palestine.” Similar phrasing has also been used by Israeli Jews, as in Likud’s founding charter in 1977: “Between the Sea and the Jordan there will only be Israeli sovereignty” (Slate, 11/30/18).

It is also grossly disingenuous to imply—as the Washington Examiner’s Mandel did—that expressing support for a binational, one-state solution in Israel/Palestine, with equal rights and guaranteed suffrage for Jews, Muslims, Christians and all other religions alike, would be a call for “genocide” of the Jewish people. As Nassar put it in the Forward:

The belief that a “free Palestine” would necessarily lead to the mass annihilation of Jewish Israelis is rooted in deeply racist and Islamophobic assumptions about who the Palestinians are and what they want.

The same claim that democratic rule would lead to a bloodbath was repeatedly asserted by apartheid South Africa, and was belied by the peaceful transfer of power to the African National Congress.

The position that all people who live in a country deserve democratic rights should not be controversial. Rather, it’s the assertion that some people should be denied citizenship in order to preserve the political dominance of a particular ethnic or religious group that should be held up to scrutiny. 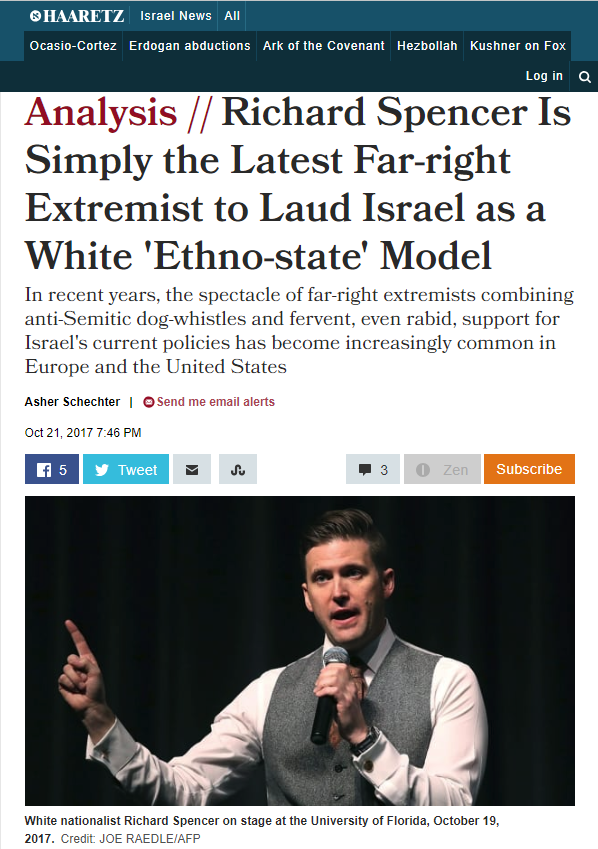 Haaretz (10/21/17) notes the troubling affinity of right-wing antisemites for Israel as a model for ethnic supremacy.

To equate a loss of domination (as a result of universal suffrage) with “genocide” echoes the claims that demographic changes in the United States amount to “white genocide.” As FAIR has recently pointed out (11/29/18), the obsession with “demographic replacement” is a mainstay of US white supremacists. Perhaps it should not be surprising that figures in the Israeli right and the antisemitic US far-right seem remarkably friendly at times—alt-right leader Richard Spencer, for example, has often described Israel as his model for a white ethnostate (Haaretz, 10/21/17).

Though CNN and Hill’s detractors have treated the ideas expressed in his speech as on the fringes, the professor does not stand alone. Newly elected member of congress Rashida Tlaib (D-MI) tweeted at the news organization, “we all have a right to speak up about injustice any and everywhere.” Phyllis Bennis and Rev. William Barber penned a stirring defense in The Nation (12/9/18), declaring:

Dr. Hill’s comments were not antisemitic; they were anti-oppression, rooted in history and calling for a common humanity, grounded in the rights of all people, whether Palestinian or Jewish, African or European, black or Native American, Latinx or white.

At a time when the disenfranchisement of ethnic minorities is receiving attention as a longstanding problem in the United States, it is distressing to see a major news organization treating an assertion of the democratic rights of all people in Israel/Palestine as an intolerable stance. It is notable that while CNN fired Hill for his call for Palestinians to be allowed to vote, it has retained Rick Santorum, who has in the past denied that Palestinians even exist.

Marc Lamont Hill was fired for defending universal rights and self-determination. CNN should rehire him and allow his voice to once again be part of its debate.

You can message CNN here (or on Twitter @CNN).

You can also sign a petition calling for the reinstatement of Hill created by If Not Now, a Jewish peace group.