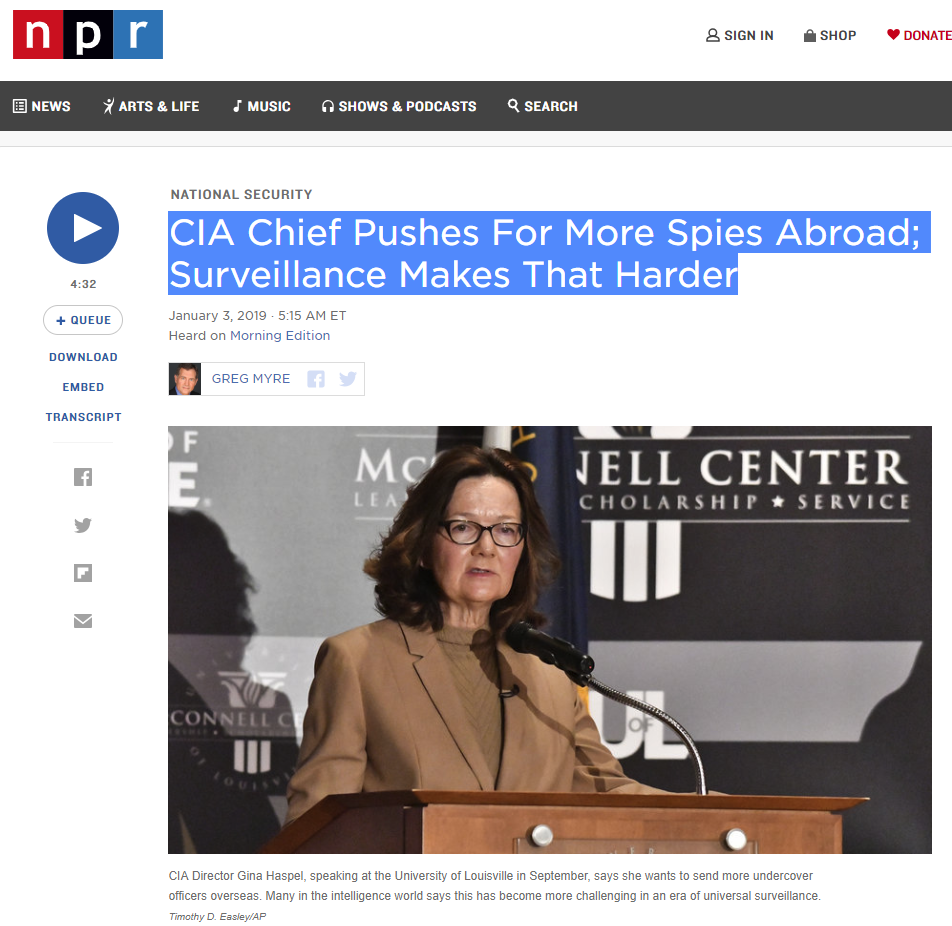 NPR (1/3/19) reports on the CIA finding it harder to sneak into other countries to commit espionage.

Imagine, for a moment, that a prominent media outlet in Iran decided to produce a story about the trials of being an Iranian spy in this technological day and age—in which the all-pervasiveness of surveillance mechanisms and social media complicates slightly the process of entering other countries under false identities.

It’s safe to assume that the United States would find this less than entertaining, and that a fair amount of ruckus would ensue, with concerned politicians and other fearmongers bleating about terror attacks and the sanctity of US borders.

Of course, no Iranian media outlet has actually done this. NPR’s Morning Edition (1/3/19), on the other hand, has just run an upbeat segment on how violating other people’s borders is now a tad more challenging for American spies than it was in past decades: “CIA Chief Pushes For More Spies Abroad; Surveillance Makes That Harder,” reported by Greg Myre.

The “push,” in fact, came in September, when CIA Director Gina Haspel—herself a former longtime undercover officer abroad—announced her desire for a “larger foreign footprint” for the CIA. Four months later, it’s the hook for NPR’s human interest story on frustrating impediments to spying.

Myre brings in various characters to populate his narrative, all of them current or ex-CIA employees. First is Jonna Mendez, former CIA “chief of disguise,” whom Myre tells us will give us “a few key tips” for Americans trying to appear European:

[Europeans] wear their wedding rings on different fingers. They eat differently than we do. They don’t shuttle that fork back and forth…. They stand up straight.

Then there’s retired CIA officer John Sipher, who “says it could be tough today to enter the same country twice with different sets of documents.” Things were much easier back in the 1980s, we’re told, when airports didn’t scan faces and fingerprints, and everyone wasn’t online. 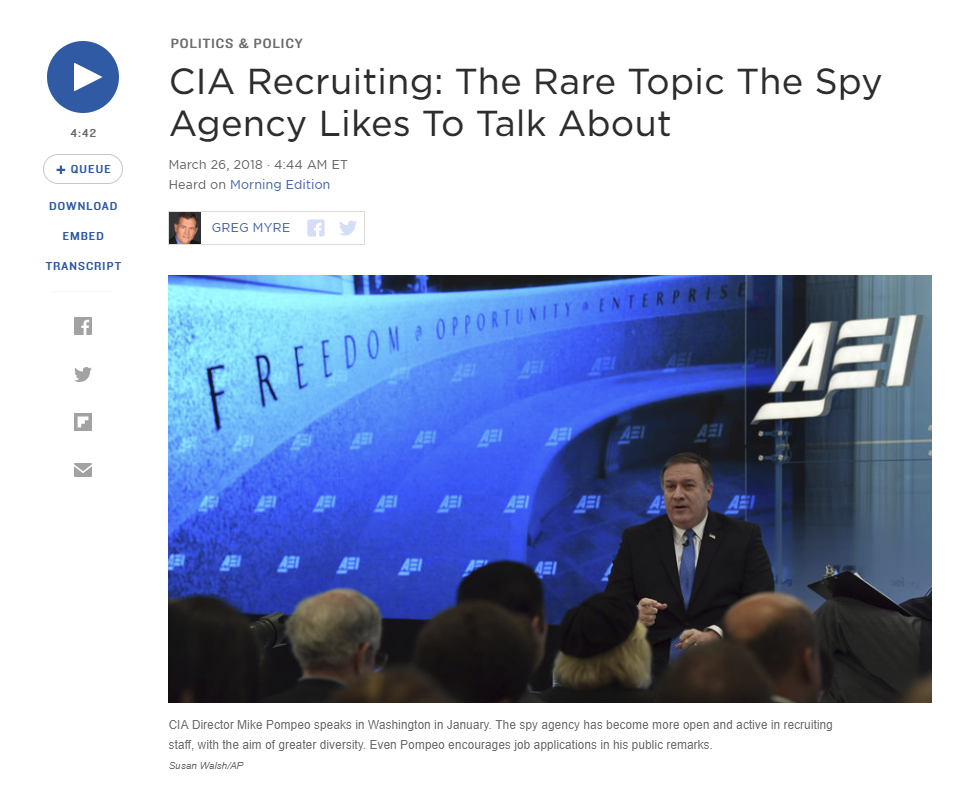 An NPR report (3/26/18) on CIA recruiting would not have been much different if it were a paid infomercial for the agency.

Next up with some remarks on social media are Sheronda, the CIA’s chief of recruiting, and Mary, an undercover officer. Incidentally, Sheronda’s soundbite—“People here do use social media. And yes, specific guidelines are provided”—is the same one that appeared in Myre’s March 2018 NPR report “CIA Recruiting: The Rare Topic the Spy Agency Likes to Talk About” (3/26/18), which might as well have been titled “Hey Kids! Here’s How to Join the CIA.”

Myre’s latest pro bono public relations effort on behalf of the agency meanwhile ends on some thoughts about how all the technology in the world can’t replace “the human touch” when it comes to intelligence gathering. “It’s a job of human beings,” says Mendez.

Which brings us to the following question: Why is NPR trying so hard to humanize an organization that is downright anti-human? After all, it’s not like the CIA’s machinations abroad are restricted to wedding ring protocol, fork-shuttling and improved posture—and a few details from its sordid history might have helped to contextualize Haspel’s current CIA proliferation scheme.

Among the major milestones on the agency’s timeline are, of course, the 1953 coup d’état against Iran’s Mohammad Mossadegh and reinstatement of the brutal shah—an obsessive purchaser of US weapons—and the 1954 coup against Guatemala’s Jacobo Árbenz, which helped set the stage for a long and gruesome war that killed or disappeared over 200,000 Guatemalans. (The CIA’s training of Guatemalan death squads is still bearing consequences in the form of waves of refugees fleeing that country’s ongoing violence—The Nation, 1/3/19.)

Also in Central America, the CIA was instrumental in the bloody Contra campaign of the 1980s—what Noam Chomsky has referred to as “a large-scale terrorist war against Nicaragua.” The war effort was also aided by top Honduran drug lord Juan Ramón Matta Ballesteros, owner of the Contra supply airline SETCO—which, scholar Roxanne Dunbar-Ortiz recalls in her Contra war memoir, Blood on the Border, was known as the “CIA airline.” Around the same time, a CIA-trained elite death squad by the name of Battalion 316 “stalked, kidnapped, tortured and murdered hundreds of Honduran men and women”—as the Baltimore Sun (6/13/95) put it—effectively “terroriz[ing] Honduras for much of the 1980s.”

In Cuba, the CIA reportedly devised no fewer than 638 ways to kill Fidel Castro—one of them, recalled by the Guardian (8/2/06), was inspired  by Castro’s fondness for scuba diving and involved “invest[ment] in a large volume of Caribbean mollusks”: “The idea was to find a shell big enough to contain a lethal quantity of explosives, which would then be painted in colors lurid and bright enough to attract Castro’s attention when he was underwater.” An impressive allocation of time and resources, indeed.

Closer to home, the CIA conducted LSD experiments on unwitting US citizens in the 1950s—and, speaking of drugs, the agency has often been up to its ears in them (despite that whole drug war the US perennially professes to be waging). A 1993 article in the International Herald Tribune (12/3/93) observed that, while “CIA ties to international drug trafficking date to the Korean War,” nowhere was the organization “more closely tied to drug traffic than it was in Pakistan during the Afghan War.”

During the devastating US war on Vietnam and neighboring countries, the Herald Tribune article specified, heroin refined in Laos was “ferried out on the planes of the CIA’s front airline, Air America.” A 2009 post by historian John Prados at the National Security Archive (8/26/09) confirmed that the “agency’s broad span of activities reached into virtually every aspect of the Indochina war,” as the CIA “actually conducted a full-scale war in Laos and ran a variety of paramilitary programs in South Vietnam.”

The list goes on. But the point, in short, is that many global inhabitants would presumably not grieve too terribly if modern-day surveillance were to complicate the CIA’s drive for a “larger foreign footprint.” 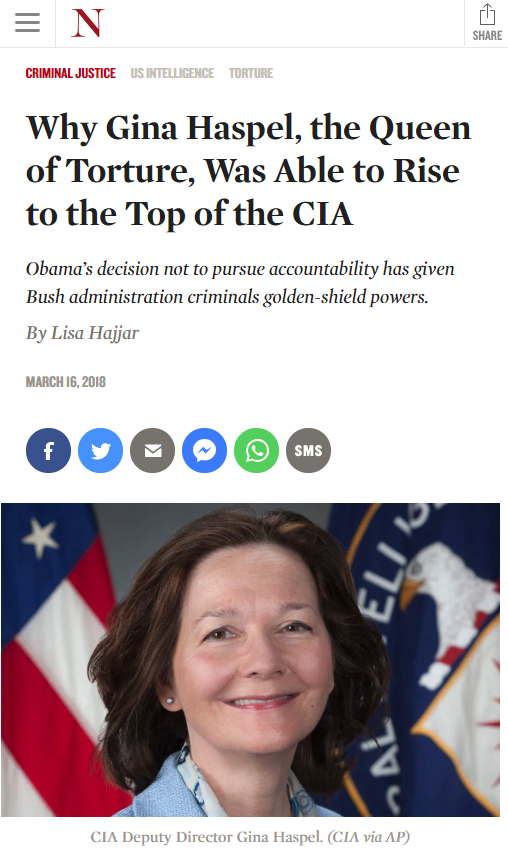 The Nation (3/16/18) takes the side of journalism by accurately labeling torture.

Nor should we forget the CIA’s contemporary history of extraordinary rendition and torture—a track record that leads us to Haspel herself. As Lisa Hajjar, a professor at the University of California at Santa Barbara and the author of Torture: A Sociology of Violence and Human Rights, wrote for The Nation (3/16/18): Haspel “played a leading role in the agency’s program of torture, kidnapping and forced disappearance during the [George W.] Bush administration.” Most specifically, Haspel “oversaw the interrogation and torture of a Saudi national named Abd al-Rahim al-Nashiri” at a black site in Thailand in 2002.

But back to NPR—which, as it so happens, is not the hugest fan of the T-word. In 2009, then–NPR vice president for news Ellen Weiss denied reports that the outlet had banned the use of the word “torture” altogether:

We gave our journalists guidance about how to avoid loaded language about interrogation techniques, realizing that no matter what words are chosen, we risk the appearance of taking one side or another.

It’s doubtless thanks to these guidelines that we end up with, for example, an NPR dispatch (2/25/15) on the US Senate’s 2014 CIA torture report in which “torture” appears a total of two times. The first is in the introductory sentence: “For years in the military courtroom at Guantánamo Bay, Cuba, there’s been a subject no one could talk about: torture.” Lest anyone think that we’re now going to talk about it, the only other reference is to “what many call ‘the torture report.’” NPR did, however, manage to describe in less “loaded language” one Guantánamo defendant’s chronic bleeding on account of overzealous rectal examination by the CIA—but, again, it’s important not to take sides.

In Myre’s segment, Jonna Mendez says that one of her responsibilities as the former CIA chief of disguise was to “de-Americanize” spies. Unfortunately for the rest of the world, it seems torture and other misdeeds are as American as apple pie; ditto, apparently, for media whitewashing of nefarious intelligence agencies.