Janine Jackson interviewed Erin Shields about net neutrality repeal for the December 1, 2017, episode of CounterSpin. This is a lightly edited transcript. 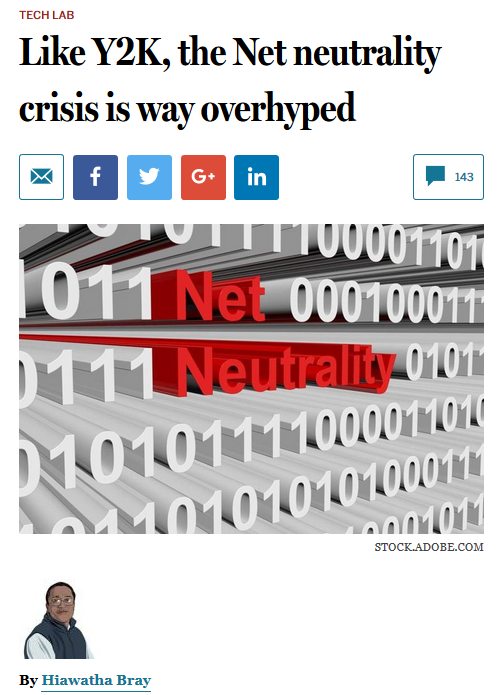 Janine Jackson: The Boston Globe technology writer says concerns about the FCC’s plan to repeal net neutrality are “overhyped”: Probably what will happen, if the agency eliminates the rules that keep the internet a level playing field, as it seems set to do, is…not much. In the same column, Hiawatha Bray describes net neutrality as “regulatory overkill on a massive scale.” So, a “massive scale” thing whose elimination will nevertheless not mean much.

Should, for example, a company like Comcast block access to, say, Amazon Prime video, so subscribers have to use Comcast’s service, Bray says, “millions of angry customers” would just “switch to a rival service.” So your head’s already well-scratched before Bray gets to the presumably ingenuous question: “What internet company would put itself in the crosshairs of public outrage just to gain a slight and temporary advantage over a rival?”

You may chuckle, but this is the level of argument in support of the FCC’s effort to repeal net neutrality rules. The truth is, advocates have everything on our side—public opinion, legal precedent, actual understanding of how the internet works. What opponents have, though, is corporate power, and its government supporters. So what now? Joining us to discuss where we are in this critical fight is Erin Shields, national field organizer for internet rights at the Center for Media Justice, one of the front-line groups on the issue. Welcome to CounterSpin, Erin Shields.

Erin Shields: Thank you for having me.

JJ: I suspect CounterSpin listeners have a healthy mistrust of media corporations claiming that they would never go against the public interest for a silly little thing like profit, but some might be persuaded that the effect of a repeal just might not be so bad, or might not mean so much. You bring people to Capitol Hill to talk with lawmakers. What sorts of concerns do they have, what kinds of stories do they tell?

ES: So a lot of my work is bringing people from the field who are doing work with media, organizing in movements, working in their communities, to talk about what net neutrality repeal would mean for them personally. And what you hear, over and over again, is this underlying issue around being able to control your own narrative.

But also, on a larger social scale, the internet has been critical to getting around larger media corporation’s control of our narratives. And so a lot of times when we’re talking with lawmakers and decision makers, what we’re emphasizing is the internet’s impact on our communities being able to tell our own stories. I’m thinking about Black Lives Matter and Standing Rock, and a lot of the work that was being done by ADAPT up on Capitol Hill to stop the repeal of the ACA. A lot of that was powered by the internet, and our ability to push back on these dominant narratives that are often pushed in mainstream media.

And in these mainstream media arenas, oftentimes we’re not even invited to the table, and so it’s critical for us to be able to use blogs and Twitter and Facebook to share information, to talk about what’s really happening on the ground. And I think that will be a massive blow to social movements moving forward, if our voices are able to be blocked and censored in those ways.

JJ: The FCC has three Republicans and two Democrats, and they often vote along party lines, and so it seems as though this move to repeal may go through in this December vote. But that’s not the end of it. What would happen, what happens then?

ES: We’re anticipating, as much as we hate to discuss it, that the repeal will happen. But what’s next is, likely, many organizations, like Center for Media Justice and EFF, will take the FCC to court. And we feel like we have a great chance at winning, because we’ve won in the past. I think you were touching on it earlier. The 2015 open internet rules have been upheld twice in court. And we believe that, based on what we’ve seen, orders that we’ve seen come out of the FCC around this repeal, that they don’t have a very good standing if we were to challenge this in court.

On the other side of that, there’s a move to pressure lawmakers to introduce some sort of net neutrality legislation. And while that may seem good on the surface level, what we’re concerned about is — I mean, as everyone, as I’m sure your listeners know, the state of this Congress is not hospitable to a net neutrality order that would keep the 2015 open internet rules as the floor. Of course there are going to be ISP lobbyists in the room when that bill is being made. And so what we’re asking congressional members to do now is to speak out publicly against this repeal and for the rules that we already have, and to demand that Chairman Pai do his job and enforce the rules that have been upheld by courts, that were come to in a democratic way, millions of comments submitted supporting these rules, and to not be beholden to his prior employers and to these four ISP companies who would benefit most from this repeal.

So there’s still a battle to be had, and we don’t want to lose organizing energy; we don’t want people to take their ball and go home after the repeal. There’s a lot that we can be doing to pressure Congress into standing publicly for the 2015 rules. And if there is any legislation put forward, to make sure that it codifies the 2015 open internet rules, and nothing less. We actually can’t take anything less than that.

JJ: So not that we are giving up on other channels, like contacting legislators, like contacting the FCC. All of that is necessary, but I know that we’re also talking about going back to the street again, aren’t we? 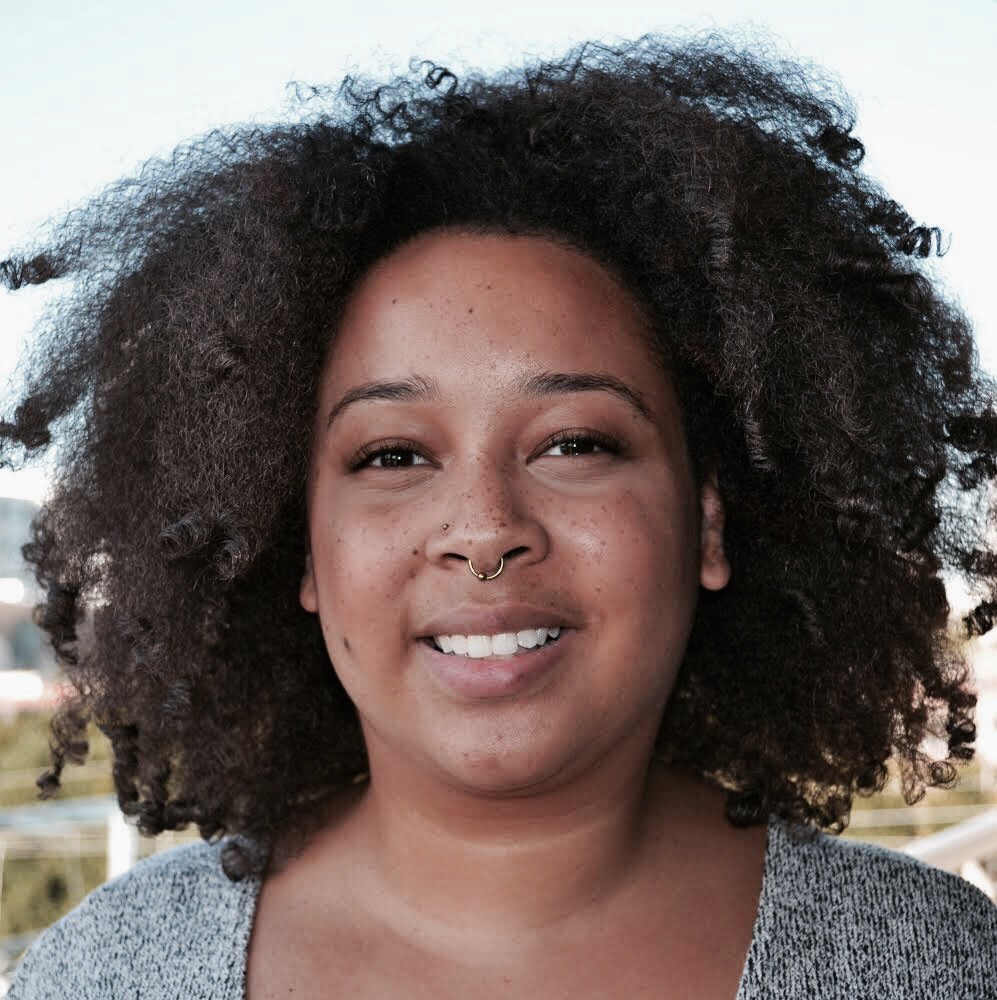 Erin Shields: “We really don’t want Chairman Pai to be able to repeal this without there being some sort of visible pushback, and letting him know who exactly is going to be impacted by this repeal.”

ES: Yeah, absolutely. We’re planning on December 14, the day of the vote, to have a massive rally, in order to keep the energy up around this issue, right outside of the FCC. We really don’t want Chairman Pai to be able to repeal this without there being some sort of visible pushback, and letting him know who exactly is going to be impacted by this repeal. I mean, I think a lot of times people think net neutrality is like this fight between internet companies, and it’s really important for us, for CMJ in particular, to say, actually, hold on, the repeal of these [rules] is not just going to cost more for Netflix, but it will actually cost more for our communities, the ways that we’re able to talk with each other, to organize, to access job opportunities, to access education. It’s a real human impact, not just an impact on a corporation’s bottom line.

And so I think that’s why you’ll see in the coming weeks a number of demonstrations, actions, and really disruptions to business as usual, because we really can’t let this repeal happen without letting our communities, the media, general public writ large, know that we disagree, and that we disagree staunchly.

JJ: We’ve been speaking with Erin Shields, who’s national field organizer for internet rights at the Center for Media Justice. They are online at MediaJustice.org. Erin Shields, thank you very much for joining us this week on CounterSpin.

ES: Thank you so much for having me.