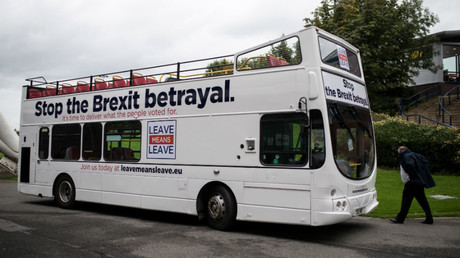 A series of resignations on the eve of finalizing the much-debated Brexit deal might topple Prime Minister Theresa May, ex-UKIP leader Nigel Farage said, as a growing number of ministers are leaving the government.

“Well done Dominic Raab, a few more and we will be rid of this duplicitous Prime Minister,” Farage wrote on social media shortly after the Brexit secretary announced his resignation.

Well done Dominic Raab, a few more and we will be rid of this duplicitous Prime Minister.

The anti-establishment politician, widely credited with the success of the Brexit vote in 2016, added that anyone who is “a genuine Brexiteer” must leave the government or “never to be trusted again,” calling the proposed Brexit plan the “worst deal in history.”

Any cabinet member who is a genuine Brexiteer must now resign or never be trusted again, this is the worst deal in history.

Earlier, Raab explained his decision to resign by saying that he can’t “in good conscience support the terms” of Theresa May’s deal with the EU.

Secretary of State for Work and Pensions Esther McVey and Minister of State at the Northern Ireland Office Shailesh Vara also quit on Thursday. Both blasted the proposed Brexit plan, which Vara said would leave the UK in “a half-way house with no time limit.”

The final deal, meanwhile, is expected to be signed on November 25.