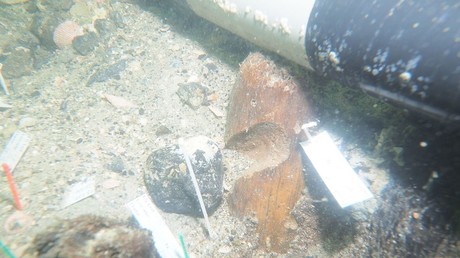 A 7,000-year-old burial site belonging to the ancestors of Native Americans has been found off the coast of southwest Florida.

Described as an “unprecedented” find by the Florida Department of State, the Manasota Key Offshore (MKO) archaeological site near Venice was preserved for thousands of years in what had been a peat-bottomed freshwater pond. Doctor Ryan Duggins, Underwater Archaeology Supervisor for the Bureau of Archaeological Research (BAR), hailed the find as a game-changer in the field.

“We now know that this type of site exists on the continental shelf,” Duggins said in a statement. “This will forever change the way we approach offshore archaeology. As we continue to learn as much as possible from the site, we look forward to sharing that knowledge with the people of Florida.”

The area has been a point of interest for archaeologists since the discovery of a human jaw bone at the site in June 2016. A single tooth in the bone showed excessive wear, a sign that its owner survived on rougher types of food than modern humans.

“That’s something we don’t see in modern populations,” Duggins told National Geographic. “That was a quick indicator we were dealing with a prehistoric individual.”

In their research, scientists found that the three-quarter-acre site existed along the shoreline during the Early Archaic period 7,000 years ago. Residents of the ancient settlement are thought to have interred their dead in a pond inland. When the settlement was submerged by rising sea levels, the remains were preserved in the peat-bottomed bed. Carbon tests carried out on the jaw bone confirmed the date of the find.

In total, six prehistoric human remains have been recovered from the site, which is now protected under Florida law, meaning it is illegal to excavate or remove any material or human remains without authorization. State Historic Preservation Officer, Doctor Timothy Parsons said that, as important as the site is archaeologically, scientists must still afford it the respect that is given to any normal burial site.