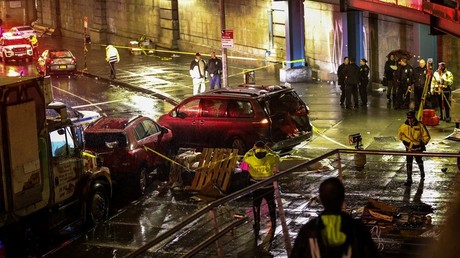 An elderly New York driver mowed down a crowd in Manhattan after he forgot to put his car in park, leaving one pedestrian dead and injuring six others – some of them critically.

The parking mistake led to tragic consequences in New York on Monday. The man was trying to parallel park near Canal and Forsyth Street around 7pm. His minivan mounted a curb and, while in reverse, crashed into a fruit stall and struck a crowd.

The botched maneuver left one person dead and injured six others, according to New York police. Two of the victims suffered critical injuries.

The man behind the wheel was identified as 70-year-old Henry Herman.

He didn’t try to flee the scene and everything indicates that act was an accident. Police say Herman claimed he thought he’d put his car in park and hit the gas pedal. He now faces charges of failure to yield to pedestrians and failure to exercise due care. He remains under arrest.

Terrible car crash on Canal St has killed 1 pedestrian and injured 6 more. A full NYPD investigation is underway. We cannot accept loss of life on our streets as inevitable. We will continue working harder every day to reach #VisionZero.