The majority of US citizens believe the two-party system is inherently flawed, and there is need for an actual third party to reflect the will of the people, a new poll has found. The trend has been stable for past five years.

The new Gallup poll, released on Friday, shows that almost every third US national is dissatisfied with the alternating reign of the Republican and Democratic parties in the American politics. Some 38 percent of respondents said that the two do such a poor job that a new major political force needs to be established.

The concept of a third big party that will challenge the long-lasting dominance of the duo has, logically, found the most favor with the Independent supporters, who have long been calling for an alternative. Seventy-two percent of the Independents rally behind the third option.

When it comes to respective supporters of Republicans and Democrats, the poll numbers paint a strikingly different picture. While the majority of Democrats, 54 percent, believe the emergance of a major third party would benefit the US politics, only 38 percent of Republicans agree. 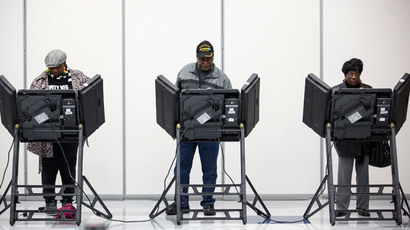 Either Republicans or Democrats have been in charge of the White House and Congress for over 150 years. Every US President since 1852 was either a Democrat or a Republican, and since 1856 one of two parties has control over Congress at any given time.

The two-party system is often criticized for being outdated, overlooking alternative opinions and thus underrepresenting big chunks of the American population. Its opponents argue that  despite the political strife over presidential and mid-term elections, Republicans and Democrats are in fact the same boat representing the interests of big corporate money. The debates between candidates from other parties, like the Green Party or the Libertarian Party, are not broadcast on mainstream TV, so there is little opportunity for voters to familiarize themselves with their agenda ahead of the elections. In the run-up to 2016 elections, RT America hosted several debates between third-party candidates – something pro-establishment media have claimed was a part of Russia’s “election meddling.”

The sentiment is not new. It was first recorded by Gallup in 2006 and has been there ever since. However in the recent years the gap has widened, and no more than 38 percent of the people have supported the two-party system since 2012.

When Gallup first started its recording, in 2003, the overwhelming majority, 56 percent versus 40 percent, believed that the two-party system is good enough and there is no need for a third contender.