A former boyfriend of Julie Swetnick, the third woman accusing Supreme Court nominee Brett Kavanaugh of sexual misconduct, has said that he has evidence that all her claims are bogus.

Richard Vinneccy, 63, told Politico that he was forced to file a restraining order against Swetnick after the couple broke up in 2001. The woman, who is now accusing Kavanaugh of attending gang rape parties in the 1980s, reportedly threatened Vinneccy and did not stop doing so when he got married and had a child.

“Right after I broke up with her, she was threatening my family, threatening my wife and threatening to do harm to my baby at that time,” the man, a registered Democrat, told the publication. Vinneccy had been in relationship with Swetnick for four years before their bitter split-up, and claims that the woman could not be trusted.

“She’s not credible at all,” Vinneccy said. He also expressed disbelief over the woman’s allegations against Kavanaugh, saying he has “a lot of facts, evidence, that what she’s saying is not true at all.” The man, however, refused to elaborate, saying that before going into any details he must first contact his attorney. 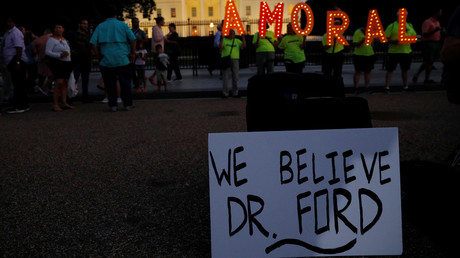 Vinneccy’s request for a restraining order was never been granted one, as the case was dropped after 13 days.
Swetnick’s attorney Michael Avenatti, however, called Vineccy’s statement “complete nonsense.” Avenatti alleged that the man filed for the restraining order when he was caught red-handed by Swetnick of using her resume to apply for the job. Avenatti argued that the scoop about Swetnick’s past is an attempt to frame a sexual assault victim and is of no use in the court of law.

The claims by Swetnick have been scrutinized by conservative commentators and publications, that pointed to what appears to be several odd moments or discrepancies in her sworn affidavit, posted by Avenatti on Twitter Wednesday.

Particular attention has been brought to the fact that Swetnick must have attended high-school parties, where presumably she saw Kavanaugh, when already in college.

The New York Times reported that according to her online resume, Swetnick graduated from Gaithersburg High School in 1980, while Kavanaugh graduated from Georgetown Prep only three years later, in 1983. In the affidavit, Swetnick claimed that she first met Kavanaugh “in approximately 1980-1981” and in the years 1981-1982 “became aware of efforts” by Kavanaugh and his friend Mark Judge to spike the punch with drugs or alcohol at the parties in order to knock down and gang rape girls.

She was attending high-school parties where gang rapes occurred while a college student? https://t.co/7mSt80OR2Z

The first thing about Julie Swetnick’s story that seems inconsistent is that girls from Gaithersburg High School in the early 80s were not regulars at Bethesda prep-school parties. Completely different social worlds.

Gaithersburg is a solid 25-30 minutes away too. Just a logistical note in all of this. Usually high school kids that far away from each other don’t go to the same parties, at least not with consistency.

Swetnick further alleged that she became a victim of such a “gang train” in 1982, with both Kavanaugh and Judge present. She didn’t accuse either of them of assaulting her, however.