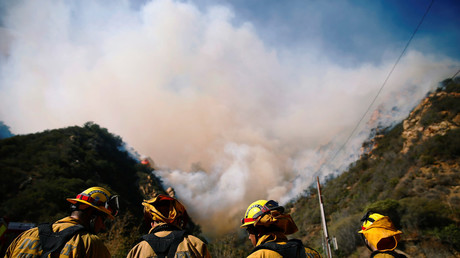 The death toll in California has risen to 31 and 228 people are still missing as three major wildfires continue to sweep across the state. An estimated 250,000 people have been displaced from their homes.

Six more people were confirmed dead from the “Camp Fire” in Paradise, northern California, taking the toll in that area to 29 alone. Five people burned to death in their homes, while another person was found scorched in a vehicle on Sunday, Butte County Sheriff Kory Honea told reporters.

Paradise, some 90 miles (145 km) north of Sacramento, has been completely destroyed by the blaze, with the authorities saying that up to 90 percent of the residents lost their homes. The death toll is expected to rise, but for now it is equal to the deadliest fire in California history.

An estimated quarter million Californians have been forced to flee their homes to escape the three blazing infernos across the state. Strengthening winds mean the flames are expected to spread even further by Tuesday. So far, the fires have spread to some 400 square miles (1,040 square km) as some 8,000 firefighters are still unable to contain the inferno.

California governor Jerry Brown is urging President Donald Trump to declare the situation as a major disaster in order to secure emergency funding.

There is no reason for these massive, deadly and costly forest fires in California except that forest management is so poor. Billions of dollars are given each year, with so many lives lost, all because of gross mismanagement of the forests. Remedy now, or no more Fed payments!

The appeal came a day after the president threatened to cut funding for California, blaming the fires on poor forest management. President of the International Association of Fire Fighters, Harold Schaitberger, deemed the comments “reckless and insulting.”

In southern California, the Woolsey Fire claimed two lives as it tore through beach resorts and coastal homes in Malibu, west of Los Angeles. An estimated 370 structures have been destroyed, while another 57,000 are believed to be under threat.

With Malibu being home to many of the rich and famous, it’s unsurprising that several celebrities have been affected by the Woolsey blaze. Neil Young, Robin Thicke, Gerard Butler and Miley Cyrus are among those who lost their homes along the coastline.

Completely devestated by the fires affecting my community. I am one of the lucky ones. My animals and LOVE OF MY LIFE made it out safely & that’s all that matters right now. My house no longer stands but the memories shared with family & friends stand strong. I am grateful for

Reality star Kim Kardashian, actress Alyssa Milano, Orlando Bloom, Lady Gaga and director Guillermo del Toro were also among the celebrities forced to pack up and flee their upscale homes in Calabasas and Malibu, with flames licking at their heels.