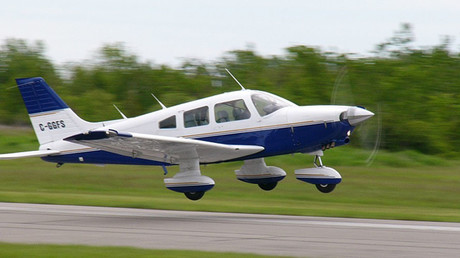 A plane carrying three people has crashed at Reno-Tahoe International Airport, killing everyone on board, according to an airport spokesperson.

The crash occurred after a single-engine Piper Cherokee aircraft plummeted into the airport parking lot just after take-off, according to spokesman Brian Kulpin, as cited by the Reno Gazette-Journal.

There are from 75 to 100 cars in the “debris area” of the parking lot, many of which will likely have to remain there for the foreseeable future. At least 15 cars were damaged, according to CNN.

“There could be some people whose cars could be here through [Monday],” Kulpin said. The airport said it will help those affected with cab fares and parking fees, local ABC affiliate KOLO 8 reported.

The Federal Aviation Administration (FAA) and the National Transportation Safety Board (NTSB) are investigating the crash, which occurred at around 6:15 pm local time on Sunday evening. The NTSB is scheduled to arrive at the site later on Monday.

The @RenoAirport is open and operational. Commercial flights are landing and taking off, despite a small GA aircraft accident.

Meanwhile, Kulpin stressed that airport operations remain unaffected, and flights will continue to arrive and depart as scheduled.