A Texas school district is facing legal problems after a school resource officer allegedly assaulted three students. The families of the students are suing the officer, the school district, and the city of Abilene for the mistreatment.

The City of Abilene, the Abilene Independent School District (AISD), and Barry Bond are all named in a lawsuit filed by the parents of three students who claim that Officer Bond “used unreasonable physical force and restraint against them,” according to the document.

The students who claim to have been mistreated by Officer Bond are a 6-year-old, a 13-year-old, and a 15-year-old. 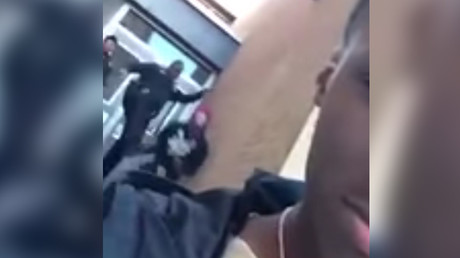 The 6-year-old, known as E.G., crossed paths with Officer Bond in early May 2014 after he grabbed a door to avoid going into school. His mother, Vania Gonzalez, claims a teacher’s aide instructed her to get help from Officer Bond. Bond told Gonzalez that he would take her son to a “time-out room” and “rough him up” before proceeding to twist his arms behind his back in order to lift him off of the ground and carry him to class.

The position that E.G was placed in is known as an “arm bar maneuver” that officers typically use to restrain adults resisting arrest. The move is also seen in mixed martial arts competitions, with Bleacher Report considering it among the most painful moves.

When Bond delivered the boy to class, his attempt to put the 6-year-old in his desk was so rough that E.G.’s head was slammed on the desk and a corner of the chalkboard. The lawsuit claims that at the time of the incident, E.G. was four feet tall and 45 pounds. In the lawsuit, Gonzalez claims to have not interfered with Officer Bond because of his position as an SRO and her personal fear of him.

The Abilene Independent School District is home to the Jefferson Center disciplinary campus, a school for students in the Disciplinary Alternative Education Programs. In Texas, students can be removed from a standard public school and sent into an alternative education school for violations ranging from felony conduct to breaking student “codes of conduct.”

E.G had been temporarily placed in the school in 2014 after being removed from another Abilene school. Teachers at the Abilene Independent School District had alerted his parents that he showed signs of Attention Deficit Hyperactivity Disorder while he was also receiving treatment for hypoglycemia, according to the lawsuit.

Officer Bond instructed Gonzalez to go to work. She claims to have felt uncomfortable but unsure how to proceed on account of Bond being a law enforcement officer. Gonzalez voiced her concerns to a teacher’s aide who told her “Officer Bond’s actions were normal, and that E.G. needed to learn how to behave.”

Gonzalez called the classroom later to check on E.G., but the teacher denied the assault had occurred. Gonzalez was transferred to Officer Bond who told her that “it was normal for him to ‘rough up’ children who do not behave.”

As a result of the incident, E.G. suffered a knot and cut on his head along with scratches and bruising from Officer Bond’s arm bar. The lawsuit also claims that E.G. “suffered from nightmares, became fearful of SROs and police officers generally, and began talking about harming himself.”

When Gonzalez and her husband requested footage of the incident, AISD denied their request. Jane Allred, the principal at the Jefferson Center, told them that the drive containing the footage was in Officer Bond’s possession.

The Gonzalez family attempted to find proper recourse for what they believed to be unjustified force used on their child. Gonzalez was assured by Principal Allred that Officer Bond would be removed from the elementary classrooms and “would have no further contact with E.G.”

However, Gonzalez claims she continued to see Officer Bond near the elementary classrooms.

Gonzalez and her husband met with two Abilene Police Department officials who reviewed Officer Bond’s report of the incident and the video. They confirmed that the armbar technique was mostly used on “intoxicated, violent, and/or uncooperative adults,” and agreed that Officer Bond should not have used it on E.G.

Later, Sergeant Cokonougher endorsed Officer Bond’s use of pain compliance on the 6-year-old and did not see a need for any additional training. Officer Bond received no discipline from the interaction.

Officer Bond would eventually receive discipline but for a different incident involving a sixth-grader known as N.M. nine months after the altercation with E.G. 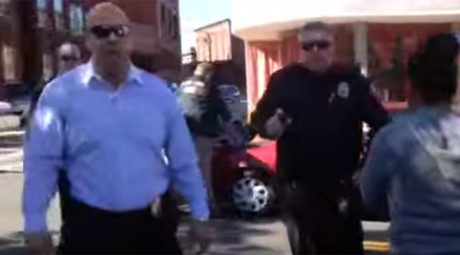 N.M. was 13 years old when, in February 2015, a substitute teacher made a comment that he found upsetting enough to leave the classroom to speak with the assistant principal. After arriving at the office, N.M. was instructed to return to class.

While N.M. was walking down the hallway, he passed Officer Bond. The two exchanged no words and Officer Bond delivered no instructions to N.M. as they crossed paths. However, the lawsuit claims that N.M. felt something pull the hood of his sweatshirt.

What he felt was Officer Bond grabbing him by the hood and throwing him to the ground, hitting his head in the fall. Officer Bond sat on N.M. with his weight on the teenager’s buttocks and placed N.M. in a tight chokehold that caused N.M. to allegedly lose consciousness.

When Officer Bond released N.M. from the chokehold, he placed him in handcuffs and led him to his officer, where he claims he remained restrained for 20 to 30 minutes before the assistant principal came to the office. Officer Bond told the administrator that they had no basis for holding N.M. and could not place him under arrest.

Lindsay Hallmark, N.M.’s mother, was summoned to pick him up from school. When she arrived, she was told that a “misunderstanding” had led to N.M. being taken to the ground by Officer Bond. Both Bond and Principal Allred claimed that the school nurse had examined N.M. and determined him to be fine. However, Hallmark later noticed marks on N.M.’s neck and learned his side of the story.

When Hallmark confronted the nurse about the clean bill of health, the nurse told her that Officer Bond had “only asked her to look at an old scab on N.M.’s hand.”

Joanna Wilson, a parent, witnessed a part of the ordeal and attempted to record the incident. However, a school staffer prevented her from doing so. Wilson did make a written statement, “in which she stated that she saw a cop slam a child face first onto the floor, get on top of the child as he lay on the ground, put the child in a chokehold, and then choke him,” according to the lawsuit.

An email from Associate Superintendent Audra Ude to the AISD Board a day after the altercation between N.M and Officer Bond confirmed that “an AISD employee had tried to stop a parent who witnessed the incident from filming it on her phone.”

Hallmark went to Principal Allred, who claimed to have witnessed the incident and denied any use of chokeholds – despite the bruising around N.M.’s neck.

Hallmark attempted to meet with the Abilene associate superintendent along with Principal Allred. However, Ude refused to meet with Hallmark or apologize for Officer Bond’s actions against N.M. At this point, Allred claimed to have not witnessed the altercation.

Gonzalez and Hallmark went to the AISD Board of Trustees where they voiced their concerns over Officer Bond’s force. The board responded by issuing a “Notice and Order of Suspension to Bond” that admitted Bond should have been limited to verbal commands when dealing with N.M. and called the chokehold “excessive.” Bond was suspended for three days as a result.

Bond claims that he did not use a chokehold, but rather a “carotid restraint,” more commonly known as a sleeper hold meant to induce rapid loss of consciousness, according to Survival Sciences. Bond admitted that he used a “carotid restraint” on N.M. three times.

Bond returned to working for the AISD after his suspension. 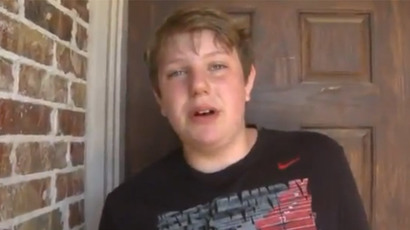 When M.D. was an eighth grader, he attempted to leave school after a teacher yelled at him in class. After opening a door into a breezeway, Officer Bond allegedly rushed at M.D. and pinned him to a wall with his elbow. Officer Bond placed his forearm against M.D.’s throat and slammed him to the ground by “putting his right leg against M.D.’s left leg and pushing down on M.D.’s shoulders.”

Once again, Officer Bond placed M.D. on his stomach, sat on his back and handcuffed him. An eighth grade teacher assisted him by sitting on the back of M.D’s knees.

When M.D. asked why he was thrown to the ground, Officer Bond claimed that M.D.’s forceful opening of the door destroyed school property. The lawsuit claims that no school property was damaged by him opening the door.

As he was being escorted to Officer Bond’s office, M.D. told him that his handcuffs were too tight. Officer Bond responded by telling him to stop resisting and slammed M.D. into the hallway’s concrete wall, then threw him on top of a trashcan and caused M.D. to fall to the ground. M.D. claims he was then taken to Officer Bond’s office where he remained alone with Bond for half an hour to 45 minutes. At no point did Bond take him to see a nurse.

Both N.M. and M.D. engaged in acts of self-harm following their alleged assaults. Officer Bond received no punishment for the altercation with M.D. and he retired from AISD in January 2016.

The Texas Observer, which initially broke the story, reported that in 2015, the Texas legislature required that officers working in schools receive special training for handling children.

Unfortunately, this policy only applies to districts of 30,000 students or more, and Abilene has just over half that number.

Deborah Fowler, executive director of the advocacy group Texas Appleseed, told the Texas Observer that it may be time to reconsider how police officers are placed in schools if they will not receive special training.

She suggested “[limiting] their interactions with students so they’re only there when they’re there to ensure safety,” and added, “At this point it seems like we’re seeing another video surface every month and it seems like we’re reacting from one lawsuit to the next.”