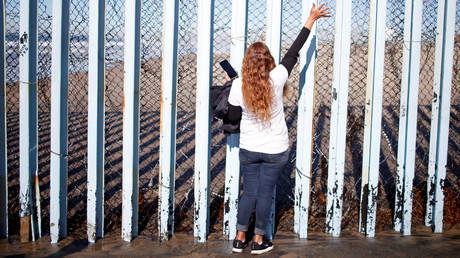 Failed Texas Senate candidate and likely presidential contender Beto O’Rourke said he would “take the (border) wall down,” becoming the first potential 2020 challenger to embrace the open borders rhetoric of the Democratic left.

As President Trump geared up to declare a national emergency and build a border wall without congressional approval, O’Rourke staked out a position completely at odds with the president.

MSNBC’s Chris Hayes: “If you could, would you take the wall down now? Knock it down?”

O’Rourke: “Yes, absolutely. I would take the wall down.” pic.twitter.com/0jYSc1kKh8

“Would you, if you could, would you take the wall down here – knock it down?” MSNBC’s Chris Hayes asked O’Rourke in an interview recorded near the Mexican border in El Paso, Texas.

“We don’t need an emergency declaration, troops deployed, or additional border walls and fencing at a time of record safety and security along the US-Mexico border,” O’Rourke added in a tweet.

We don’t need an emergency declaration, troops deployed, or additional border walls and fencing at a time of record safety and security along the U.S.-Mexico border. https://t.co/2zjiHx851a

Border crossings have indeed been relatively low in recent years, but are climbing. Arrests along the Mexican border fell to around 304,000 in 2017, the lowest number since 1971. Since then, they have risen to 396,000 in 2018. Arrests are up again this year, with 201,500 illegal immigrants apprehended between October and January.

While large swathes of desert and badlands remain completely unguarded, some stretches of the border are protected by fencing, walls and other barriers. O’Rourke’s native El Paso is shielded by 124 miles of double-layered barrier which significantly slashed crossings after it was completed in 2008.

For all the critics trying to find ANY other explanation for why El Paso’s illegal crossings dropped after building a fence, how do you explain these graphs? How do you explain what we see in Brownsville, where fencing dramatically reduces crossings? pic.twitter.com/I3QQ7aEHDD

El Paso and the Mexican city of Ciudad Juarez have been separated by a chain-link fence since the 1970s, with the latest reinforcements added since 2006. The barriers were built after then-president George W. Bush passed the Secure Fence Act, funding over 600 miles of fencing along the 2,000-mile border.

The act, O’Rourke continued, has “not in any demonstrable way made us safer. It’s cost us tens of billions of dollars to build and maintain. And it’s pushed migrants and asylum seekers and refugees to the most inhospitable, the most hostile stretches of the US-Mexico border, ensuring their suffering and death.”

O’Rourke’s embrace of open borders played well with some of the more fervent opponents of Trump’s wall, and with his own fangirls.

You need to run please!

Why do Americans feel the need to cower behind a wall like a snowflake pansy? Did they lose their brass ones when the old guards passed away? Why are all the American women emasculating their president saying his is weak and needs to hide behind a wall?

The former Texas Representative was mocked and slated by the right, however.

Curiously, some of the Democrats who are fervently opposing Trump’s border wall initiatives now were OK with Bush’s fences. Senate Minority Leader Chuck Schumer, a fierce opponent of Trump’s planned wall, voted in favor of the Secure Fence Act in 2006. So too did 64 House and 26 Senate Democrats. Barack Obama, Hillary Clinton, and Joe Biden all supported the act, which pledged $8 billion towards building barriers and another $46 billion for other border security initiatives.

Schumer and House Speaker Nancy Pelosi – Trump’s two opponents in the fight for wall funding – have endlessly criticized the wall, but neither have advocated to remove existing barriers.

“If Nancy Pelosi thinks that Walls are ‘immoral,’ why isn’t she requesting that we take down all of the existing Walls between the US and Mexico, even the new ones just built in San Diego at their very strong urging,” Trump tweeted last month. “Let millions of unchecked ‘strangers’ just flow into the US.”

If Nancy Pelosi thinks that Walls are “immoral,” why isn’t she requesting that we take down all of the existing Walls between the U.S. and Mexico, even the new ones just built in San Diego at their very strong urging. Let millions of unchecked “strangers” just flow into the U.S.

Trump’s 2020 campaign manager, Brad Parscale, made a similar argument on Thursday. Naming a handful of potential Democratic presidential candidates, Parscale asked whether they would back O’Rourke’s call to tear down the wall.

O’Rourke has not announced his candidacy, but opened the week with a campaign-style rally in El Paso – right across the road from a Trump rally. While Trump promised he would “finish the wall,” O’Rourke declared that “walls end lives.”