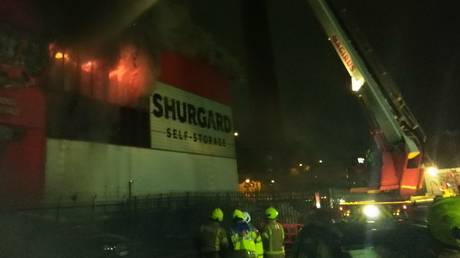 More than 100 firefighters and 20 engines have been mobilized on New Year’s Eve to battle a blaze at a self-storage warehouse in Croydon, a southern suburb of London.

The calls about the fire on Purley Way came in just before 8 pm local time, London Fire Brigade has said. There were no reports of injuries. The cause of the fire is still unknown.

The initial responses consisted of eight engines and 60 firefighters, which eventually doubled as the blaze raged on.

Firefighters eventually said they would remain on the scene into the new year, and advised area residents to keep their windows closed due to the large amount of smoke coming from the warehouse.

Croydon is a bustling town of almost 400,000 residents some 15 km south of the heart of London.