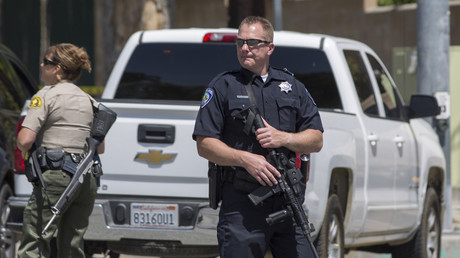 At least 10 people have been injured after an overnight shooting in San Bernardino, California, police said, adding that three of them are in “extremely serious” condition.

The incident took place in an apartment complex at 1277 E. Lynwood Drive on Sunday night, according to San Bernardino Police Capt. Rich Lawhead, as cited by local media.

“We found 10 victims down at the scene. Three are extremely critical,” Lawhead said.

The city is about 90km east of Los Angeles. Police believe there was “an exchange of gunfire,” according to the officer. “I can tell you multiple shots were fired, I don’t want to guess how many,” he added.

According to Lawhead, people had gathered to play a game, possibly dice, when the shooting happened. “It was a chaotic scene,” he admitted, adding that the suspects fled the scene.

Local residents described the incident in the apartment complex. “My brother-in-law could hear bullets flying past our house, he was outside at the time of the shooting,” Alysa Marie, who lives in the area, told CNN.

Eduardo Rivas said: “I heard around four shots, then what sounded like a motorcycle speeding off, after that just a continuation of gunshots.”