The bigger newspapers are, the harder their profits fell in the last five years, according to newly revised data provided Monday by the Inland Press Association.

Profits fell 100.1% since 2004 at newspapers with circulation greater than 80,000, said Tim Mather, the analyst at the trade association who collated financial date reported by 120 papers across the nation.

Compared with other industries, however, publishers on average still are doing remarkably well.

Notwithstanding the triple-digit profit plunge occasioned by a 28.09% drop in advertising sales, the largest newspapers reported profits averaging 12% of sales at the end of 2008, according to the Inland study.

A 12% profit margin is more than double that achieved last year by Wal-Mart Stores, the largest of the Fortune 1,000 companies. A 12% pre-tax profit is just about a percentage point light of the margins run by Exxon and Chevron, the second and third largest corporations behind Wal-Mart on the Fortune list.

The reason margins could fall 100% and profits could still average 12% is that some newspapers plunged from proftabiliy to steep losses but other pubications still generated healthy, double-digit margins, said Mather in response to queries (see comments below) as to the validity of the data.

If average profitability were calculated on a weighted basis, then it might be lower than 12%, he explained. But the association took a simple average of the profitability of each publication in each of several circulation brackets and “that’s the way the math works,” said Mather.

As you can see from the table below, sales in the last five years fell at all but the smallest papers. However, operating profits tumbled in each and every circulation category.

Papers with less than 15k circulation reported that they were able to lift revenues despite a slump in advertising that started in 2006 and has accelerated every quarter since.

Papers with circulation of 15k to 25k suffered the least damage to their bottom lines, according to data volunteered by publishers who were guaranteed anonymity by the industry association.

When the Inland survey originally was released last week, an error in computing the data indicated that papers in the 25k-50k bracket had suffered a 190% plunge in profitability. But Mather said the actual drop was 90%.

The results in the original report were counterintuitive, because the abundance of anecdotal evidence suggests metro papers have been most deeply affected by declines in readership and advertising revenues.

Combined with high and intractable cost structures, it stood to reason that their profits would be squeezed the most. 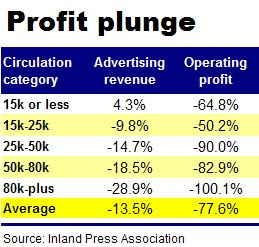