US officials have ruled out a deal to exchange 15 Royal Navy personnel captured in the Gulf for five Iranians seized by American forces in Iraq. 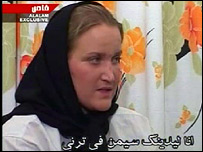 State department spokesman Sean McCormack rejected suggestions that a swap could be made.

The five, believed to be members of Iran’s Revolutionary Guard, were seized in January in the Iraqi city of Irbil.

Britain denies Iran’s claims that the UK crew was in its waters when seized on 23 March.

The five Iranians were captured in a raid along with equipment which the Americans say shows clear Iranian links to networks supplying Iraqi insurgents with technology and weapons.

US officials have condemned Iran’s actions and publicly supported the UK.

Mr McCormack said: “The international community is not going to stand for the Iranian government trying to use this issue to distract the rest of the world from the situation in which Iran finds itself vis-a-vis its nuclear programme.”

“It is possible that the British soldiers who entered into Iranian waters will go on trial for taking this illegal action,” Gholamreza Ansari told Russian television channel Vesti-24, according to Iran’s IRNA news agency.

Earlier, Prime Minister Tony Blair condemned Iran for “parading” the UK crew on television in a way which would only “enhance people’s sense of disgust”.

In what appeared to be an edited broadcast on an Iranian channel, sailor Nathan Thomas Summers said: “I would like to apologise for entering your waters without permission.”

He was shown alongside two colleagues, including Leading Seaman Faye Turney, 26, from Shropshire, who was broadcast apologising to Iran earlier in the week.

A third letter, allegedly from LS Turney, was released on Friday in which she said she had been “sacrificed” to UK and US government policy.

The BBC has been able to confirm the names of six of the 15 captured sailors and marines.

Along with LS Turney and Nathan Summers, who is from Cornwall, they are Paul Barton from Southport, Danny Masterton from Ayrshire, Joe Tindall from south London and Adam Sperry from Leicester.

European Union foreign ministers, meeting in Bremen, Germany, called for “the immediate and unconditional release” of the sailors and expressed “unconditional support” for Britain’s position.

She also disclosed there was nothing in a formal letter from the Iranians to the UK that suggested they were looking for a solution to “this difficult situation”.

In the latest video, Nathan Summers says: “Since we’ve been arrested in Iran our treatment has been very friendly.

“We have not been harmed at all. They’ve looked after us really well.

“The food they’ve been serving us is good and I am grateful that no harm has come to us.

“I would just like to apologise for entering your waters without permission. And that happened back in 2004, and the government promised that it wouldn’t happen again.”

BBC defence correspondent Paul Wood said last year US President Bush gave a secret order that Iranian agents believed working in Iraq should be captured or killed because of the coalition’s belief that Iran was “fermenting trouble in Iraq”.

He said it meant there was a “compelling theory” that the UK sailors were captured as a result of an order “from the highest levels of Iranian government” which would make it a “very different game” for the Foreign Office to sort out.

Earlier, the UN Security Council called on Tehran to allow the UK access to the personnel and urges an “early resolution”, including release of the crew, but stopped short of “deploring” Iran’s action, as requested by the UK.

The Britons, based on HMS Cornwall, were seized by Revolutionary Guards as they returned from searching a vessel in the northern Gulf.