A majority of Americans believe that the FBI should have recommended charges against Hillary Clinton for her handling of classified emails while secretary of state, according to a new poll.

In the new Washington Post/ABC poll released Monday, 56 percent of respondents disapproved of FBI chief James Comey’s decision not to indict Hillary Clinton, and only 35 percent said that they approved. Similarly, 57 percent said that the fiasco makes them worried about Clinton’s behavior if she were elected president, with 39 percent didn’t have their opinions changed in this regard. Forty-three percent, however, said that the incident makes them “very worried” about how she might act. 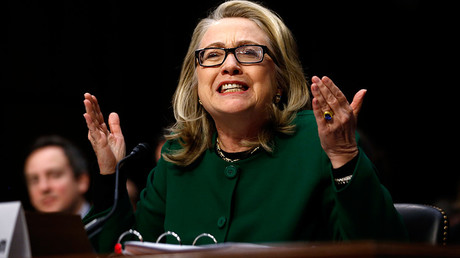 A majority – 58 percent – said that the private email affair wouldn’t sway their vote in the 2016 presidential election, while 28 percent said that they are now less likely to support her and 10 percent said it makes them more likely to do so.
The poll found opinions of the FBI’s decision were divided along party lines. Ninety percent of Republicans said that they thought Clinton should have been indicted, and perhaps a surprisingly high number of Democrats – 30 percent – said the same.
Forty-seven percent of Republicans said that the issue is less likely to make them less inclined to support her.

Among Democrats, the email issue makes no difference to 74 percent, and has 16 percent the issue has strengthened their support. Ten percent of Democrats say they’re less likely to vote for her because of the FBI’s decision, however.

Wrapping up a nearly year-long investigation of Clinton, FBI Director James Comey announced that the agency would not recommend charges against Hillary Clinton for her alleged mishandling of high sensitive communications on an unsecured server during her tenure as secretary of state. However, he did call the behavior of Clinton and her staff “extremely careless.”

Attorney General Loretta Lynch agreed with the FBI’s recommendations and did not indict Clinton. A day later, the State Department said that it will reopen its own internal investigation of the former secretary of state in light of the new facts.
The Washington Post/ABC News poll was conducted July 6 to 7, and it surveyed a random national sample of 619 adults. The margin of error is 5 percentage points.