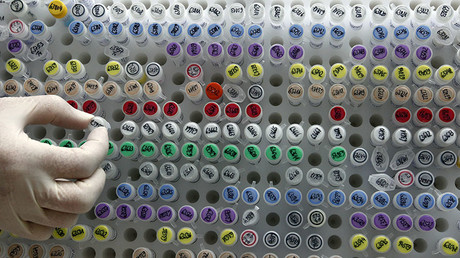 A ruling out of Missouri’s Court of Appeals found that frozen embryos have the same rights as any other marital property, but not children. The case was the result of a woman who wanted to use frozen embryos from her and her ex-husband against his wishes.

Corporations are still people under the eyes of justice, but embryos are not, according to a ruling out of Kansas City’s Court of Appeals. This will come as bad news to Jalesia “Jasha” McQueen, 44, and as great news to her ex-husband, Justin Gadberry, 34.

The couple froze several embryos in 2007, CBS News reported. Some were used and resulted in the couple having twins, but when their 2010 separation brought the issue to the courts. McQueen hoped to use the remaining embryos to have more children, but Gadberry was not interested.

The 2-1 ruling from the Court of Appeals favored Gadberry’s desired outcome, but the justices responsible for it acknowledged that the case had touched on sensitive issues over unborn personhood. Appeals Judge Robert Clayton III said the court “recognizes the sensitive nature of this case and the differing personal beliefs it evokes – ethical, religious and philosophical – pertaining to scientific advancements in reproductive technology, procreation choice, and the age-old and disputed question of when life begins.”

However, in Clayton’s opinion, the court was not ruling on where or when life begins. He wrote, “We are only required to decide whether frozen pre-embryos have the legal status of children under our dissolution of marriage statutes.”

Dissenting Judge James Dowd believed Missouri’s statute claiming that life begins at conception should be the mitigating factor for the case, writing, “Missouri law makes one thing abundantly clear: The two embryos at issue in this case are human beings with protectable interests in life, health and well-being.”

Dowd also disagreed that “Gadberry’s interests outweigh those of his unborn children.”

Cases like McQueen’s are relatively uncommon, due to in vitro fertilization (IVF) being a recent advance in science. Therefore, a ruling like this one could create a precedent in Missouri. But on the other hand, it also makes rulings more open to judgement.

Steve Clark, McQueen’s attorney, told CBS News that the ruling “essentially created law out of thin air” and claimed “they do not and cannot point to any holding of the U.S Supreme Court that says there’s some sort of right not to procreate.”

McQueen was disappointed by the ruling. “Here’s somebody, my ex, who walks away with no responsibility for having entered into this process voluntarily, of his own free will, with the intention of creating children,” she told KSDK, “And that doesn’t account for anything, because his rights supersede mine now, all of a sudden.”

Gadberry’s attorneys argued that the ruling did not impede McQueen’s ability to have children, but just that she could no longer have children with her ex-husband. Tim Schlesinger, his attorney, explained, “My client does not want to be forced to have additional children with his ex-wife,” the St. Louis Dispatch reported.

Schlesinger hammered this point, saying, “If you just imagine the implications of forcing people to have all of the embryos that are created implanted.”

Gadberry has expressed an interest in donating the embryos to science, infertile couples or having them destroyed. McQueen is not ready to give up easy, though. She and her attorney said they plan to appeal and even go to the Missouri Supreme Court if necessary.