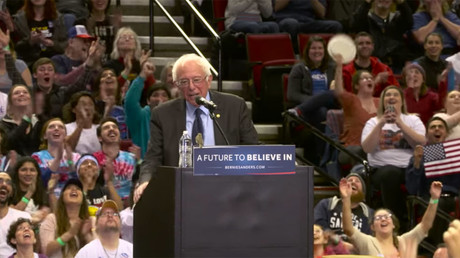 Hillary Clinton’s devastating loss to Donald Trump has left many Democrats stumped, as the party struggles to process what happened and why. While some blame “racist” Trump voters or third parties, others wonder whether Bernie Sanders could have won instead.

Sanders, an independent US senator from Vermont who stood with the Democrats as a self-described “democratic socialist,” made a bid to become the party’s nominee in 2015. He quickly inspired hundreds of thousands of young voters across the country with his criticism of income inequality and influence of big money in politics, as well as proposals about single-payer healthcare and free college tuition.

Bernie would have blown trump out of the water. And the DNC has no one to blame for this loss but themselves

With Clinton as the favorite of the party establishment and backed by “superdelegates,” Sanders could not overcome Clinton’s advantage during the primary campaign, eventually conceding the nomination at the party’s national convention in Philadelphia in July. As late as May, however, all polls showed him beating Trump in a general election match-up, with a lead of up to 15 percentage points.

Meanwhile, a reputable poll showed Clinton losing to Trump – which is exactly what happened on Tuesday.

Many Democrats lashed out in anger after the votes were counted, painting Trump’s supporters as uneducated racists, or blaming the Green Party’s Dr. Jill Stein or the Libertarian Party’s Gary Johnson for “taking away” votes that could have made the difference in several swing states with razor-thin margins of victory.

“Why are third party candidates to blame for Hillary’s loss instead of the 50 [percent or so] of people who didn’t vote?” former Libertarian candidate Austin Petersen wondered.

“As we now see, this election was not about high-skilled political operatives, polls or even national campaign experience. Trump had none of that. This campaign was about large crowds, big events, momentum, tone and social media. Bernie did those things well. Bernie was the anti-Trump,” King wrote Wednesday.

Sanders himself urged his supporters to back Clinton and campaigned vocally against Trump. However, many “Berners” found the Democratic nominee simply impossible to stomach.

“Clinton was proud of her hawkish and aggressive ways, and that is terrifying,” wrote Cassandra Fairbanks, a journalist and former Sanders supporter who decided to back Trump after the convention.

Photographers captured images of Sanders crying when word of Trump’s victory came in. On Wednesday evening, he issued a statement describing the election as a revolt of the downtrodden Americans against the corrupt system.

“To the degree that Mr. Trump is serious about pursuing policies that improve the lives of working families in this country, I and other progressives are prepared to work with him,” Sanders said. “To the degree that he pursues racist, sexist, xenophobic and anti-environmental policies, we will vigorously oppose him.”

The Clinton campaign’s slogans – “I’m with her” and “History made,” for example – indicated that the former First Lady, US senator and secretary of state counted on the appeal of electing the first female president to energize the voters as much as the prospect of the historic win by an African-American.

Yet the high unfavorable ratings for both Clinton and Trump translated into a drastically lower turnout than in 2012 or 2008, with many Democrats who were enthused about Barack Obama simply not feeling the same about Clinton. She went on to win some 200,000 votes more than Trump nationwide, but lost the Electoral College in a landslide, leaving her party pondering what might have been.