OTTAWA – The Canadian government is said to be ready to declare as toxic a chemical widely used in plastics for baby bottles, beverage and food containers as well as linings in food cans. 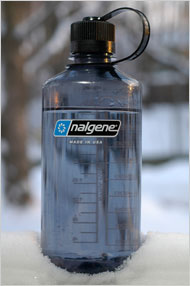 A Nalgene brand bottle, which is made with bisphenol-a.

A person with knowledge of the government’s chemical review program spoke on the condition he not be named because of a confidentiality agreement. He said the staff work to list the compound, called bisphenol-a, or B.P.A., as a toxic chemical was complete and was recently endorsed by a panel of outside scientists.

A public announcement by Health Canada may come as early as Wednesday but could be delayed until the end of May. Canada would be the first country to make a health finding against B.P.A., which has been shown to disrupt the hormonal systems of animals. The department’s decision was first reported in The Globe and Mail, a Toronto newspaper, on Tuesday.

Also on Tuesday, a draft report from the United States Department of Health and Human Services’ National Toxicology Program endorsed a scientific panel’s finding that there was “some concern” about neural and behavioral changes in humans who consume B.P.A.

B.P.A. is widely used to make polycarbonate plastics, which are rigid and transparent like glass but very unlikely to shatter. Polycarbonates have many uses that pose no risk, like the cases of some iPod models. Because animal tests have shown that even small amounts of the chemical may cause changes in the body, however, researchers have focused on food- and drink-related applications of B.P.A., like the popular Nalgene brand beverage bottles.

“If the government issues a finding of toxic, no parent in their right mind will be using products made with this chemical,” said Rick Smith, the executive director of Environmental Defence, a Canadian group that has been campaigning against B.P.A. “We will be arguing strongly for a ban on the use of this chemical in food and beverage containers.”

The public and industry will have 60 days to comment on the designation once it is released, setting into motion a two-year process that could lead to a partial or complete ban on food-related uses of plastics made using B.P.A.

Alastair Sinclair, a spokesman for Health Canada, said, “When the minister has an announcement to make, he will make it.” Mr. Sinclair declined to answer any questions.

A spokeswoman for the Canadian Plastics Industry Association referred a request for comment to the American Chemistry Council in Arlington, Va. The council did not respond to interview requests.

Some scientists question the significance to humans of studies indicating that even very small amounts of B.P.A. can induce changes in animals. There is also some dispute about how much of the chemical is released by plastics.

Jack Bend, a professor of pathology at the University of Western Ontario in London and one of the Canadian government’s outside scientific advisers, declined to comment on what action Health Canada would take. But he said he was concerned about the widespread use of B.P.A.

“The first thing is that it’s an endocrine disrupter, there’s no question about that,” Professor Bend said, referring to the chemical’s impact on the hormonal system. “Should people that are exposed to these low levels of this chemical be outrageously concerned? I’d err on the side of not creating panic. We simply don’t know. But we should find out.”

Professor Bend added that the impact of B.P.A. on the development of human fetuses was worrisome. It may prove to cause damage in much the same way as early exposure to mercury, he said.

But Warren G. Foster, director of the center for reproductive care and reproductive biology at McMaster University in Hamilton, Ontario, is more skeptical.

“In my experience working with bisphenol-a, it’s a relatively benign chemical,” said Professor Foster, who once headed the reproductive toxicology group at Health Canada. “There’s room here for a lot more research.”

He added that substances could be declared toxic under Canada’s chemical management system if they had the potential for adverse effects in animals but not humans.

“If I was a fish and there was bisphenol-a in the water, I’d be concerned,” he said. “If I was a fetus and my mother was using a plastic water bottle, I wouldn’t be bothered.”

While the Canadian plastics association referred a reporter to Professor Foster, he said that he had no ties to it or the chemical industry.

The draft report released in the United States is effectively a call for further research on the chemical.

Michael D. Shelby, the director of the toxicology program’s center for the evaluation of risks to human reproduction, said he wanted to see further confirmation that the test results could be repeated and more data about the long-term consequences of exposure to the chemical.

But he said that research strongly suggested that polycarbonate food and beverage containers and food cans were the main source of human exposure to B.P.A. When asked if people should stop using them, Dr. Shelby replied: “That becomes kind of a personal choice. These are certainly two things people can get around.”

In a statement, the American Chemistry Council said the draft report “affirms that there are no serious or high-level concerns for adverse effects of bisphenol-a on human reproduction and development.”