Almost 80,000 families in England face the prospect of becoming homeless by 2020 unless Prime Minister Theresa May abandons cuts to housing benefits, a former Labour minister claims.

John Healey, a former housing minister, says the projection, which includes 60,000 households with children, is in addition to those already sleeping rough on the streets.

Campaigners have previously warned that the country’s most vulnerable people will not be able to afford the rent on their homes if the government goes ahead with £1 billion in cuts to housing support and benefits penciled in by former chancellor George Osborne.

Healey’s new projections are based on the average annual increase of homeless households in Britain between 2009 and 2016, which he says currently stands at 6.3 percent. 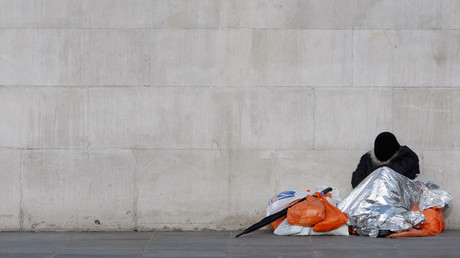 Healey told the Independent: “The Conservatives’ record on housing is six years of failure, and in no area is this more painfully clear than homelessness.

“We should all be ashamed that in one of the richest countries in the world there has been such a huge increase in the number of people who are homeless over the last six years.

“These figures are a stark warning for Theresa May not to continue with the same decisions on housing and social security that have failed so badly over the last six years.”

Healey says May should exempt hostels for the homeless and other specialist accommodation from the planned cuts.

The projections come after an all-party committee of MPs said government austerity measures have increased homelessness in the UK by as much as 30 percent.

A report by the Communities and Local Government Select Committee found that the number of people rough sleeping in England hit 3,569 between 2014 and autumn 2015. One quarter of those were sleeping on the streets of the capital.

Earlier this year, a report commissioned by the Joseph Rowntree Foundation found that more than 1.25 million people in Britain are impoverished or living in destitution, meaning they don’t have enough money for food, clothes, heating, shelter, and toiletries.